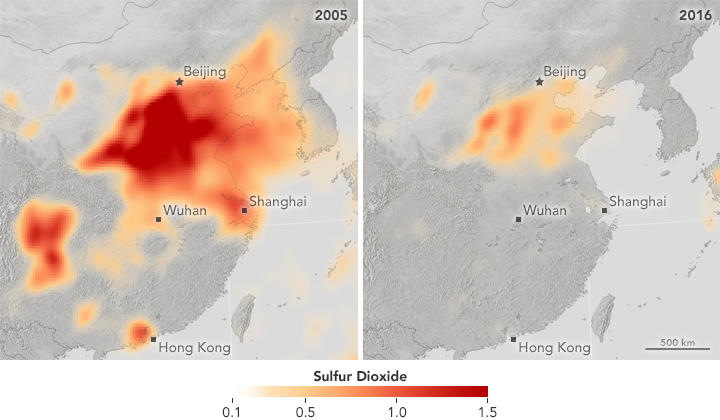 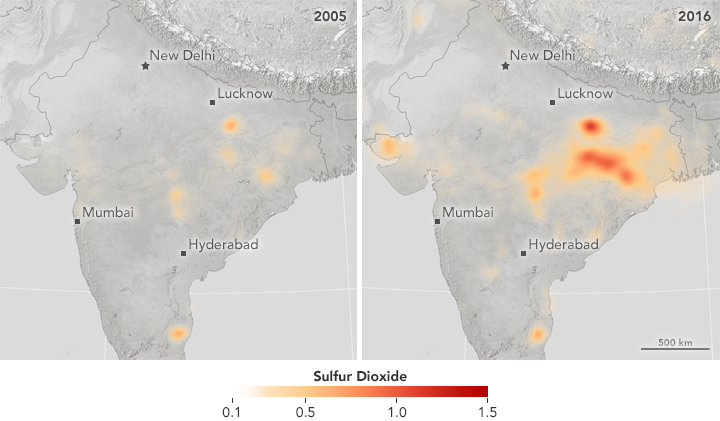 A new study by researchers from the University of Maryland and NASA indicates that China has greatly reduced its emissions of sulfur dioxide, while India’s emissions have risen dramatically. Sulfur dioxide (SO2) is an air pollutant that leads to acid rain, haze, and many health-related problems. It is primarily produced today through the burning of coal to generate electricity.

“The rapid decrease of sulfur dioxide emissions in China far exceeds expectations and projections,” said Can Li, an atmospheric chemist in the University of Maryland’s Earth System Science Interdisciplinary Center and at NASA’s Goddard Space Flight Center. “This suggests that China is implementing sulfur dioxide controls beyond what climate modelers have taken into account.”

The maps above show regional views of sulfur dioxide emissions as observed by the Dutch-Finnish Ozone Monitoring Instrument (OMI) on NASA’s Aura spacecraft. The values are yearly averages of sulfur dioxide concentrations over India and China in 2005 and 2016. The data come from the study that was published on November 9, 2017, in the journal Scientific Reports.

China and India are now the world’s top consumers of coal, which typically contains up to 3 percent sulfur. Most of the sulfur dioxide emissions come from coal-fired power plants and coal-burning factories. In particular, Beijing suffers from severe haze problems because of the factories and power plants located nearby and upwind.

Starting in the early 2000s, China began implementing policies such as fining polluters, setting emission reduction goals, and lowering emissions limits. According to the new study, these efforts are paying off. “Sulfur dioxide levels in China declined dramatically even though coal usage increased by approximately 50 percent and electricity generation grew by over 100 percent,” explained Li. “This suggests that much of the reduction is coming from controlling emissions.” Previous studies, which relied on ground-based inventories and published policies, projected that China’s sulfur dioxide emissions would not fall to current levels until 2030 at the earliest.

Despite the 75 percent drop in sulfur dioxide emissions, recent work by other scientists has shown that the country’s air quality remains poor and still causes significant health problems. This may be because sulfur dioxide contributes just 10 to 20 percent of the particles that cause haze. “If China wants to bring blue skies back to Beijing,” Li said, “the country needs to also control other air pollutants.”

By contrast, India’s sulfur dioxide emissions increased by 50 percent over the past decade. The country opened its largest coal-fired power plant in 2012 and has yet to implement emission controls like China. “Right now, India’s increased sulfur dioxide emissions are not causing as many health or haze problems as they do in China because the largest emission sources are not in the most densely populated area of India,” Li said. “However, as demand for electricity grows in India, the impact may worsen.”