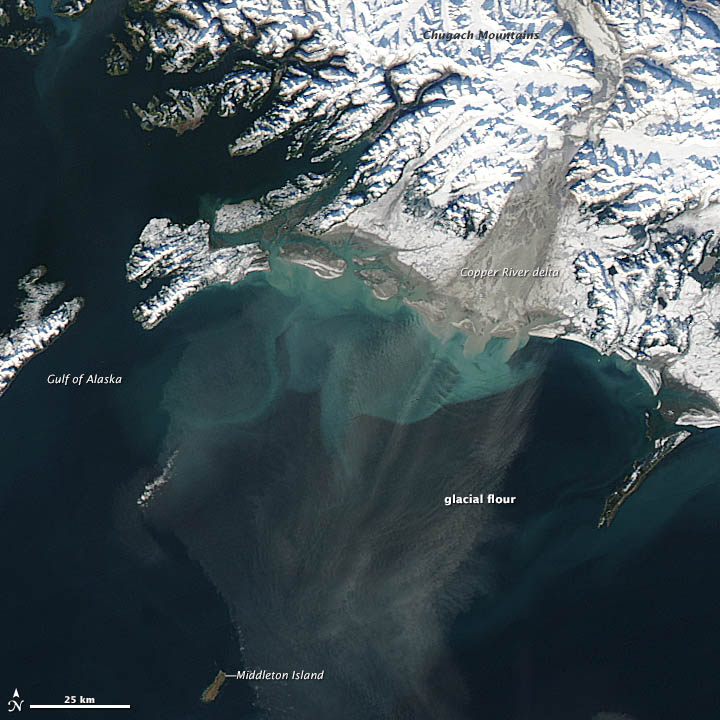 When glaciers grind against underlying bedrock, they produce a silty powder with grains finer than sand. Geologists call it “glacial flour” or “rock flour.” This iron- and feldspar-rich substance often finds its ways into rivers and lakes, coloring the water brown, grey, or aqua. When river or lake levels are low, the flour accumulates on drying riverbanks and deltas, leaving raw material for winds to lift into the air and create plumes of dust.

That’s what was happening on October 23, 2012, when the Moderate Resolution Imaging Spectroradiometer (MODIS) on NASA’s Aqua satellite acquired this image of northerly winds blowing a plume of dust from the Copper River delta out over the Gulf of Alaska. Dust storms are most common in Alaska in the fall, when river levels are at their lowest. Satellites have observed similar events in recent years.

This dust storm was first noticeable in MODIS imagery on October 21 and was still clearly visible on October 27. Though the plume extended more than 100 kilometers (60 miles), the dust did not appear particularly thick in comparison to what was produced during previous events. A two-week event in 2006, for instance, produced dense plumes that lofted between 30 and 80 kilotons of glacial flour into the atmosphere. (The event was described in detail in a research paper in Geophysical Research Letters.)

Since 2011, a team of NASA-funded scientists has been monitoring filtered air samples from a site on Middleton Island, a small island in the Gulf of Alaska. The data collection is part of a project to improve understanding of Alaskan dust storms and to validate satellite observations.

Scientists are monitoring Arctic dust for a number of reasons. Dust storms can reduce visibility enough to disrupt air travel, and they can pose health hazards to people on the ground. Dust is also a key source of iron for phytoplankton in regional waters. Finally, there is the possibility that dust events are becoming more frequent and severe due to ongoing recession of glaciers in coastal Alaska.