There is more than one way for iron to get into the central Gulf of Alaska, but none rival the visual spectacle of wind-blown plumes of dust from from Alaska’s Copper River Valley.

The Moderate Resolution Imaging Spectroradiometer (MODIS) on NASA’s Terra and Aqua satellites captured these images on October 23, 24, and 25, 2016. Much of the dust is comprised of “glacial flour” or “rock flour”—a silty powder with grains finer than sand. This iron- and feldspar-rich substance forms when glaciers grind against underlying bedrock. Winds tend to loft it in the fall when river levels are low and snow has not yet fallen.

While coastal waters in this part of Alaska have relatively high levels of iron, the micronutrient tends to be in short supply in deeper waters in the middle of the Gulf of Alaska. Soluble iron is an essential nutrient in marine ecosystems because phytoplankton—which sit at the center of marine food webs—depend on it to develop. These floating microscopic plant-like organisms are eaten, in turn, by everything from zooplankton to whales. So an ocean without much phytoplankton is often an ocean without much life at all.

Dust storms play a key role in fueling phytoplankton blooms by delivering iron to the Gulf of Alaska. Even a small addition of iron there can spur a bloom, explained Santiago Gassó, a scientist at NASA Goddard Space Flight Center who is monitoring the current dust storm.

While Gassó and other scientists will be using satellites to keep an eye out for phytoplankton blooms in the coming days, there is no guarantee that they will see one. “It is early winter in Alaska, so there may not be enough phytoplankton still alive (or not yet dormant) to trigger a response,” Gassó said. It is also possible that a bloom may occur, but that satellites will miss it because of cloud cover.

While the relationship between iron and phytoplankton is understood in broad terms, there are many details about the process in the Gulf of Alaska that are still unknown. For instance, what happens to iron that does not get used quickly? It may remain near the surface all winter and promote phytoplankton blooms in the spring, when more light is available. Or it may just sink.

To help clarify the role of dust storms, a small team of NASA-funded scientists, including Gassó, have been studying the area since 2011 with satellites and with ground-based air monitors on Middleton Island. The island sits right in the middle of many dust plumes streaming from the Copper River delta. “I don’t think people realize that Middleton Island is one of the best places in the world to study the natural ocean fertilization by wind-blown dust,” said Gassó. 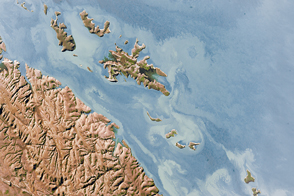