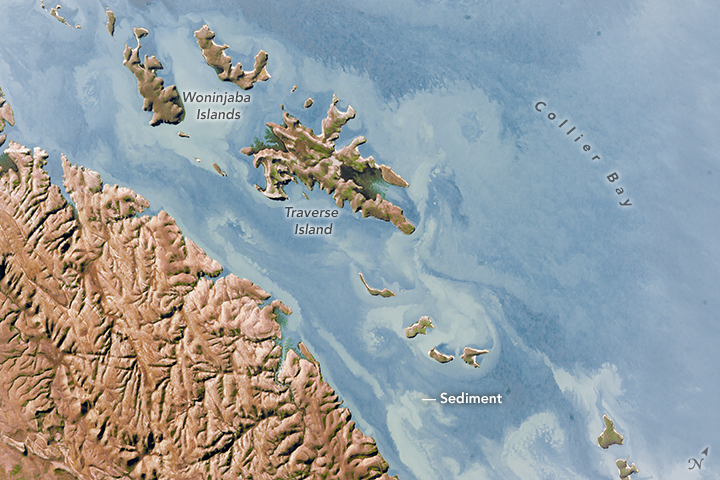 Once clouds have cleared away, the effects of major storms often can be viewed from space for days and weeks. That is what happened when an astronaut aboard the International Space Station took this photograph of roughly 20 kilometers (12 miles) of coastline and islands on the northwest coast of Australia.

The tan and white swirls in the sea are sediments that washed out after an unusual rainfall event during the dry season. Rain fell inland on August 30–31, about five days before this image was taken, and the sediment was channeled down local rivers and out into Collier Bay. Rainfall records from two towns in the Kimberly region of Australia—24 millimeters in Derby and 46 millimeters in Fitzroy Crossing—indicate that there was a continuous stretch of rainless days for weeks before and after this chance rainfall event. (The wet monsoon season runs from November to April.)

The sediment patches seem to be chaotic, but the ragged, finger-like pattern is actually typical where near-shore tides move water to and fro, especially at the heads of bays. Long, narrow patches of sediment also show the direction of the local ocean current, which runs from east to west (lower right to upper left, at image lower center).

The dominant sediment pattern in the image is the accumulation on the downstream side (north and west sides) of the islands, where the water is protected from the east-west ocean current. The biggest islands—Traverse and Woninjaba—have the biggest sediment patches.

The Kimberly region of Western Australia is so remote that boat and helicopter are the usual means of moving through this wilderness area. Tourists are drawn to the natural beauty of the mountainous scenery.

Astronaut photograph ISS048-E-72377 was acquired on September 4, 2016, with a Nikon D4 digital camera using an 800 millimeter lens, and is provided by the ISS Crew Earth Observations Facility and the Earth Science and Remote Sensing Unit, Johnson Space Center. The image was taken by a member of the Expedition 48 crew. The image has been cropped and enhanced to improve contrast, and lens artifacts have been removed. The International Space Station Program supports the laboratory as part of the ISS National Lab to help astronauts take pictures of Earth that will be of the greatest value to scientists and the public, and to make those images freely available on the Internet. Additional images taken by astronauts and cosmonauts can be viewed at the NASA/JSC Gateway to Astronaut Photography of Earth. Caption by M. Justin Wilkinson, Texas State University, Jacobs Contract at NASA-JSC.

Once clouds have cleared away, the effects of major storms often can be viewed from space for days and weeks.