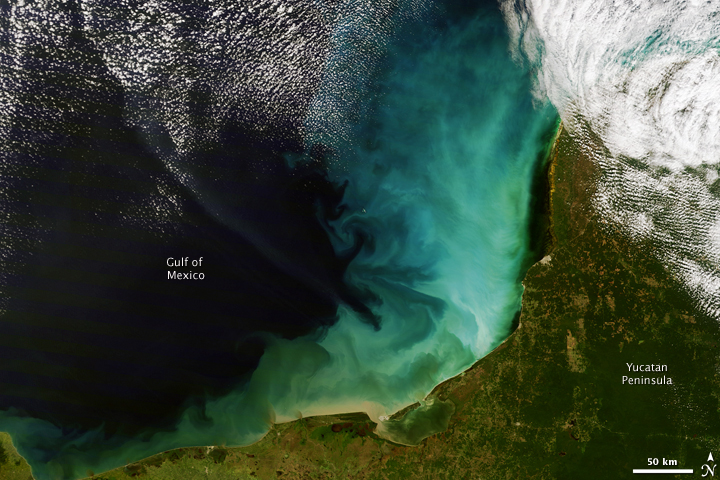 A burst of color lit the shallow waters of the Gulf of Mexico off the Yucatan Peninsula on December 14, 2008, when the Moderate Resolution Imaging Spectroradiometer (MODIS) on NASA’s Terra satellite captured this image. The swirls of tan, green, blue, and white are most likely sediment in the water. The sediment scatters light, giving the water its color. The sediment comes from two sources: the land and the sea floor. Some of the color may also come from phytoplankton, tiny plant-like organisms that live in the sun-lit surface waters of the ocean.

Near the shore, the water is tan where rivers carry dirt from land to the ocean. As the sediment disperses, the water fades to green and then black. To the north, the water is more blue and white than tan and green. In these regions, the sediment has likely come from the sea floor. Made up of chalky white calcium carbonate from shell-building marine life like coral, sea floor sediment gives the water a white or bright blue color. The sediment was probably brought to the surface in shallow waters by strong waves. A few days before the image was taken, strong winds churned the Gulf. The blue-green cloud in this image roughly matches the extent of the shallow continental shelf west of the peninsula.

Ocean Color in the Gulf of Alaska

The winter-white Alaska shoreline provides a vivid contrast to the turquoise swirls in the black waters of the Gulf of Alaska. This burst of color in an otherwise black-and-white scene is caused by sediment, ground into fine powder by mountain glaciers and carried into the Gulf of Alaska through many waterways. The largest contributor of sediment shown in this photo-like image is the Copper River, immediately east of Prince William Sound.