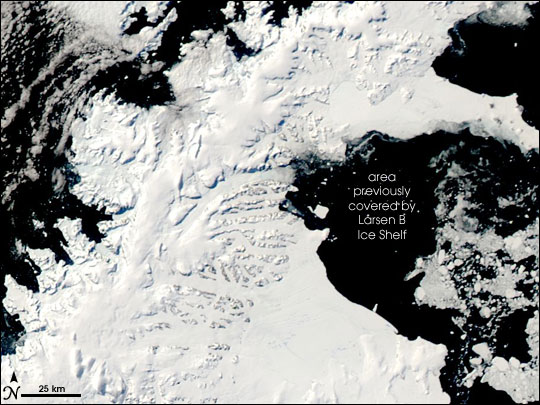 A cloud-free afternoon over the Antarctic Peninsula on February 9, 2007, provided this striking image of rugged, snow-covered mountains; glacier-filled valleys; and smooth, broad expanses of ice shelves hanging over the lip of the coastline into the blue-black waters of the Southern Ocean. A few scattered clouds linger in the upper left corner of the image, while sea ice swirls in the waters at image right.

The semi-circular bay at the right side of the image is the area that the Larsen B Ice Shelf occupied for at least 400 years (and possibly as many as 12,000 years) until March 2002. Increasingly warm summers on the Antarctic Peninsula over recent decades caused the huge ice shelf to disintegrate suddenly in March 2002. The ice volume that drifted away as icebergs into the Weddell Sea wouldn't have raised sea level because the ice shelf was already floating in the water; the ice took up just as much room in the ocean as the water that would be produced when it melted. However, ice shelves act like brakes for glaciers flowing off land into the ocean, so their loss may accelerate the flow of glaciers, which can raise sea level.

In February 2007, scientists at NASA’s Goddard Institute for Space Studies released their annual assessment of global temperature anomalies. As it has been for many years in recent decades, the Antarctic Peninsula was much warmer in 2006 than the long-term average for the past century. The poles are likely to continue to experience significant climate change in coming decades due to the warming caused by human-produced greenhouse gases.