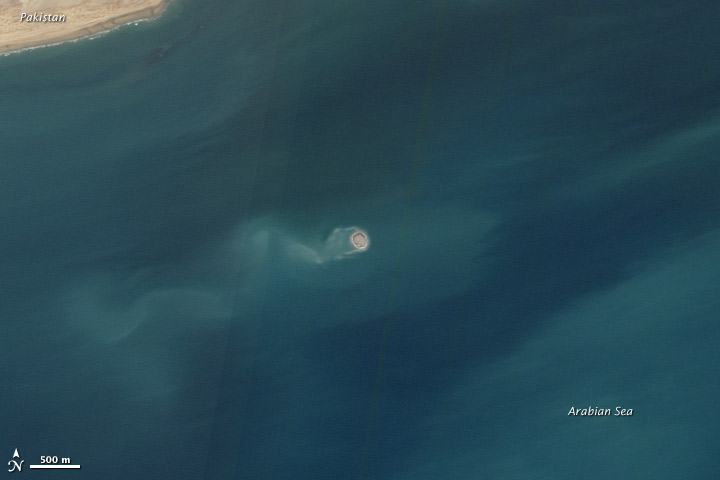 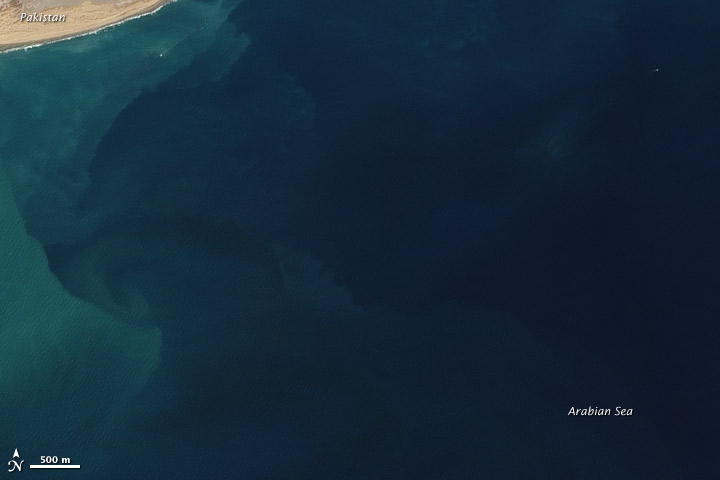 On November 26, 2010, Pakistani fishermen returned from a day at sea to report that a new island had emerged. The tiny dot of land was a mud volcano, and it was still visible on January 11, 2011, when the Advanced Land Imager (ALI) on NASA’s Earth Observing-1 (EO-1) satellite acquired the top image. The mud volcano was absent in a previous overpass on February 11, 2010, shown in the lower image.

There’s no need to change any maps, however; mud volcanoes have risen off the coast of Pakistan in the past and disappeared again within a few months, washed away by the waves and currents in the Arabian Sea. It is quite likely that this new volcano will meet the same fate. Indeed, a stream of pale brown sediment was snaking away from the volcano to the west on January 11, suggesting that erosion was already underway.

Pakistan’s mud volcanoes form as a result of plate tectonic activity. The Arabian plate—the section of Earth’s crust that carries the Arabian Sea—is sinking beneath the Eurasian land mass at about four centimeters per year. Some of the thick sediment and rock on top of the Arabian plate has sloughed onto the edge of the Eurasian plate, forming Pakistan’s coastal plain, the Makran Desert, and the underwater slope leading away from the shore. It is from this sloughed-off land that the mud volcanoes form.

Beneath the sediment, along the accretionary front, the sinking Arabian plate heats up under extreme pressure and rock melts into magma. Volcanic gases and magma heat the groundwater, turning it in a hot acid that dissolves rock into a slurry of mud and clay. The mud and gas seep through faults, eventually erupting at the surface as a mud volcano.

Pakistan has a number of mud volcanoes in the Makran Desert and offshore. According to the U.S. Geological Survey, mud volcanoes are usually less than 1-2 meters (3-7 feet) tall. But Pakistan’s Chandragup Complex includes a mud volcano that is 100 meters (330 feet) high.

The same tectonic activity and fault systems that produce these volcanoes occasionally produce large earthquakes, such as the magnitude 7.2 quake that shook southwest Pakistan on January 18, 2011.

This image from February 11, 2010, shows several mud volcanoes that rise from the desert landscape of southern Pakistan, along the coast of the Arabian Sea.