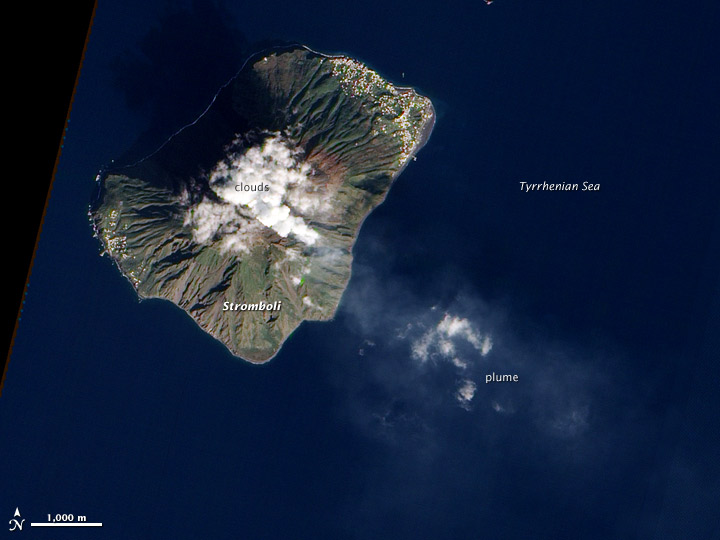 The mild eruptions of Italy’s Stromboli Volcano are so frequent and numerous that an entire style of volcanism—strombolian—is named after the volcano. Strombolian eruptions are characterized by nearly continuous lava fountaining, accompanied by emissions of gas, ash, and volcanic bombs. The sight of that lava spraying into the sky at night has led people to nickname Stromboli the “Lighthouse of the Mediterranean.”

This natural-color satellite image shows the island of Stromboli, the volcano’s cloud-covered summit, and a thin volcanic plume on January 13, 2011. The image was acquired by the Advanced Land Imager aboard Earth Observing-1 (EO-1).

The volcanic island has been building, according to geologists, for nearly 200,000 years. Historical records of eruptions at Stromboli date back 2,400 years, and carbon dating suggests that the volcano has been almost continuously active for at least 1,400. The current eruption has been going on uninterrupted since 1932. For most of the past 5,000 years, eruptions and venting have sprung from the Sciara del Fuoco (Stream of Fire), a large collapse scar on the northwest side of the island.

The peak of the island volcano stands 924 meters (3,030 feet) above sea level, but in fact the entire structure rises more than 2,000 meters (6,500 feet) from the sea floor. The volcano is a result of the subduction of the African tectonic plate as it collides with and slides under the Eurasian plate.

Today, a few hundred people call the island home, though past populations counted in the thousands. In Jules Verne's novel Journey to the Center of the Earth (Voyage au Centre de la Terre), Axel and Otto Lidenbrock finish their journey by climbing out through Stromboli.

Continuously active for more than 1,000 years, Stromboli Volcano continued its mild activity in January of 2010.