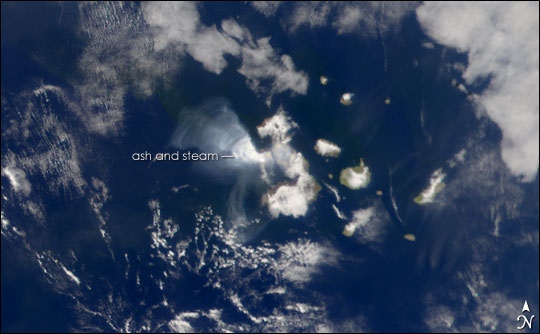 On the westernmost island in the Galapagos Islands lies the volcanic chain's most active volcano: Fernandina. Located on a remote, uninhabited island in the Galapagos National Park, the volcano's eruptions often go unobserved, but on May 13, 2005, the volcano's eruption was unmistakable. A short time after the volcano started to erupt, the Sea-viewing Wide Field-of-view Sensor (SeaWiFS) flying on the OrbView-2 satellite captured this image. A thick cloud of ash and steam rises from the volcano and fans out to the west. A smaller, slightly darker plume is blowing south from the island. This darker plume may be more ash-rich than the larger plume, or it may be smoke from fires ignited by lava flows.

The Instituto Geofisico of the Escuela Politecnica Nacional of Ecuador reports that ash rose to a height of seven kilometers from a fissure on the west side of the volcano. Volcanic material has fallen on the neighboring Isabela Island. The volcano's last eruption was in 1995.