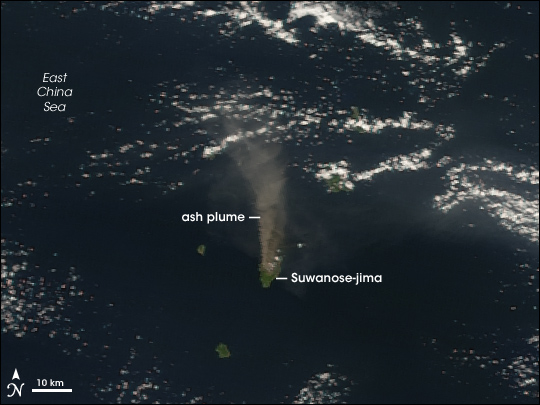 On September 20, 2006, the Moderate Resolution Imaging Spectroradiometer (MODIS) on NASA’s Terra satellite caught the Suwanose-jima Volcano in the East China Sea in the process of emitting volcanic ash and steam. In this image, the volcano’s emissions blow northward, gradually fanning out over the ocean. The volcanic plume’s dingy hue distinguishes it from the nearby white clouds.

Suwanose-jima is one of Japan’s most active volcanoes. This tiny volcanic island, only 8 kilometers (5 miles) long and sparsely populated, is a stratovolcano consisting of alternating layers of hardened lava, ash, and volcanic rocks ejected by previous eruptions. The volcano has two craters that have shown activity during recorded history. One of the craters, named Otake, underwent intermittent eruptions between 1949 and 1996. These eruptions were strombolian, named after the Stromboli Volcano in Italy, ejecting hot cinders and lava bombs. After 1996, the volcano showed longer periods of quiet. The volcano’s biggest historical eruption was in 1813-1814, when lava flows reached the coast.