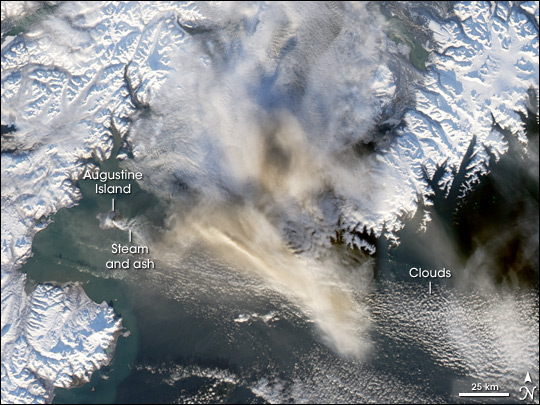 Augustine Volcano, in the Cook Inlet of the Gulf of Alaska, erupted on January 13 and 14, 2006. According to the Alaska Volcano Observatory (AVO), these explosive eruptions produced clouds of volcanic ash and flows of mud and rock fragments. Although more eruptions were not certain to occur as of January 17, 2006, the volcano could be expected to erupt again without warning. Based on eruptions observed in 1976 and 1986, observers at the AVO anticipated that eruptions might continue for a period of several days to a few weeks.

The Moderate Resolution Imaging Spectroradiometer (MODIS) flying onboard the Aqua satellite captured this image on January 13, 2006. In this image, a discernible steam and ash plume streams from the small volcanic island and heads eastward over the ocean. The brown and white cloud of material in the middle of the image is likely composed of volcanic material from Augustine. To the east, a distinct cloud formation appears. Land surface areas are covered with snow, although the volcanic island looks darker, as if its own snow cover has melted or been buried by volcanic debris.

Augustine is a 1,260-meter-tall (4,134-foot-tall), cone-shaped volcano built from alternating layers of ash, lava, and rock fragments. It has historically been the most active volcano in the Cook Inlet area, experiencing eruptions throughout the 19th and 20th centuries. This volcano experienced some unrest in December 2005.