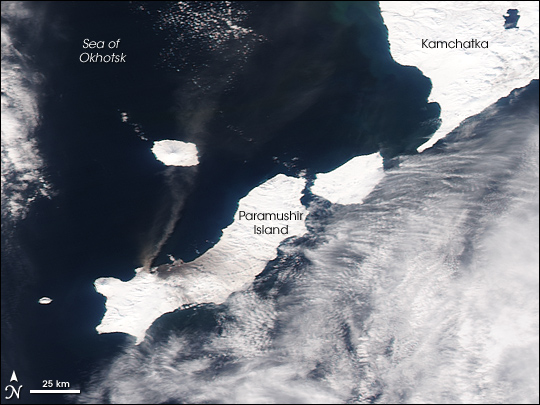 In early April 2007, the Chikurachki Volcano on Paramushir Island, off Russia’s Kamchatka Peninsula, released a plume of volcanic ash. The Moderate Resolution Imaging Spectroradiometer (MODIS) on NASA’s Aqua satellite took this picture on April 5. This image shows the volcano sending a dark plume of volcanic ash northward over the Sea of Okhotsk. Some volcanic ash has also stained the snowy white surface of the island.

Chikurachki Volcano is a stratovolcano composed of alternating layers of hardened lava, ash, and volcanic rocks. It is a fairly small volcano, but because it sits atop a high volcanic edifice constructed during the Pleistocene epoch, it is the highest volcano on Paramushir Island.

You can download a 250-meter-resolution Chikurachki KMZ file for use with Google Earth.