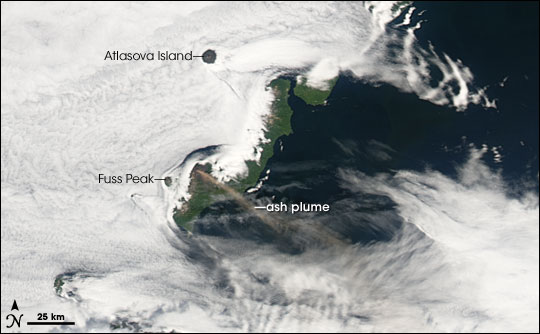 Chikurachki Volcano, in the northern Kuriles off the Kamchatka Peninsula, began releasing a plume of volcanic ash and steam on August 18, 2007. The following day, the Moderate Resolution Imaging Spectroradiometer (MODIS) flying on NASA’s Aqua satellite took this picture. Besides Chikurachki, whose plume blows toward the southeast over the ocean, the image captures the summits of neighboring volcanoes, Atlasova Island and Fuss Peak, poking their heads above the cloud cover.

Chikurachki is the highest volcano on Paramushir Island, part of the Kurile Island chain between Kamchatka and Japan. The volcano is a stratovolcano composed of alternating layers of hardened lava, solidified ash, and volcanic rocks.

You can download a 250-meter-resolution KMZ file of Chikurachki suitable for use with Google Earth.