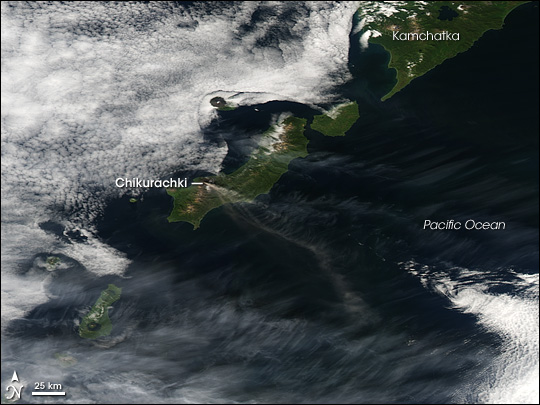 In the northern Kurile Islands, off the coast of Russia’s Kamchatka Peninsula, Chikurachki Volcano released a plume of ash and/or steam on September 8, 2007. At the time of the event, the Moderate Resolution Imaging Spectroradiometer (MODIS) on NASA’s Aqua satellite captured this image of the plume blowing over the Pacific Ocean, toward the southeast. In this image, the volcanic plume appears similar in color and thickness to some wispy clouds to the immediate north.

Chikurachki is a stratovolcano—a steep-sloped cone composed of alternating layers of hardened lava, solidified ash, and volcanic rocks. This stratovolcano is actually a relatively small cone sitting atop an older structure that was built by volcanic activity in the Pleistocene. The underlying edifice makes Chikurachki, with a summit elevation of 1,816 meters (5,958 feet) the highest volcano on Paramushir Island.

You can download a 250-meter-resolution KMZ file of Chikurachki suitable for use with Google Earth.