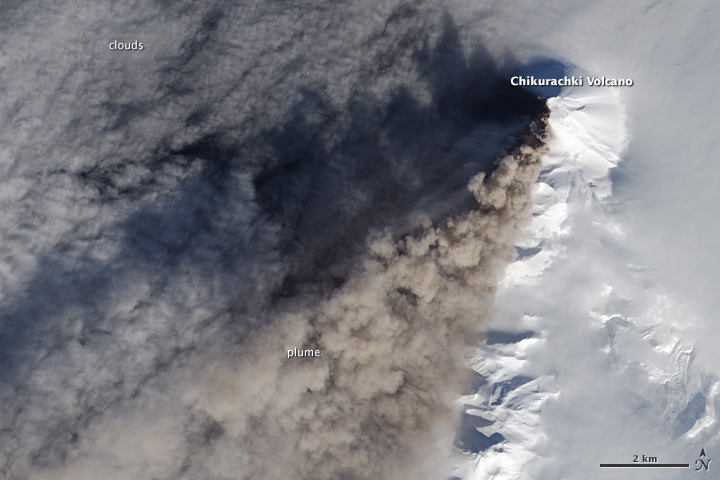 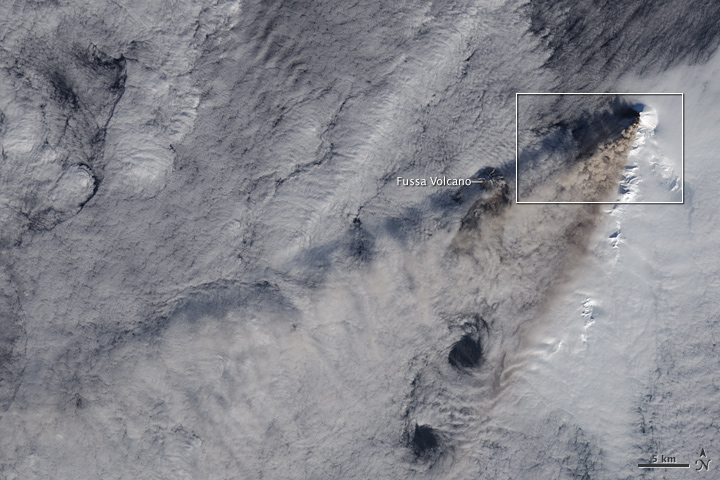 Chikurachi rises 1,816 meters (5956 feet) above the western Pacific Ocean on Paramushir Island, just south of Kamchatka. It is made up of alternating layers of hardened lava, ash, and rocks, and it is one of the more active volcanoes in the tectonically rich area. Chikurachki had several eruptive episodes between 2002 and 2008, but has been relatively quiet since then.

The Operational Land Imager (OLI) on Landsat 8 captured a natural-color view of the eruption on February 17, 2015. The top image is a closeup pulled from the second image.

The highest plume—up to 7.5 kilometers (25,000 feet)—occurred on February 16, based on reports from the Kamchatka Volcanic Eruption Response Team (KVERT). Winds carried the ash as much as 275 kilometers to the west. Emissions continued on February 17 and 18, though plumes rose no higher than 3.6 to 4.5 kilometers (12,000 to 15,000 feet); as a result, aviation warnings were lowered to orange (the second highest level). By the 18th, winds had shifted and the plume was blowing east.

You can see the shifting ash plumes in images acquired by the Moderate Resolution Imaging Spectroradiometer (MODIS) on NASA’s Terra and Aqua satellites on February 16, February 17, and February 18.

The stratovolcano is one of the most active volcanoes in the Kuril island arc.