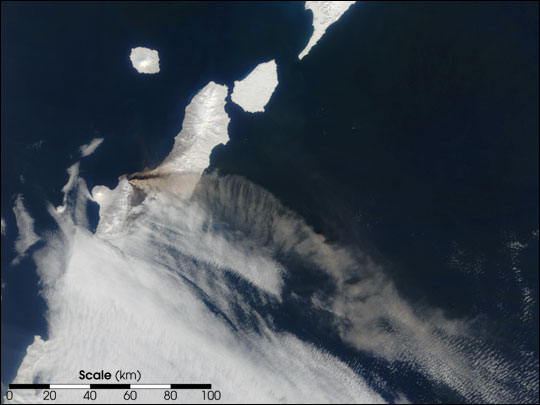 This true-color satellite image shows Russia’s Chikurachki Volcano sending a plume of ash streaming eastward over the North Pacific. At 1,816 meters (5,958 feet), Chikurachki is the tallest of the many volcanoes on Paramushir Island. Paramushir is part of the Kuril Island arc—a chain of volcanic islands stretching from the southern tip of Russia’s Kamchatka Peninsula to northern Japan.

The current series of eruptions began on April 18, 2003, and ash plumes from the volcano have reached at least 2,000 meters (6,560 feet) high. Although the volcano presents little threat to locals in the sparsely populated area, the ash cloud could potentially block airline flight paths from North America to East Asia. An earlier series of eruptions, lasting several months, began on January 25, 2002, and lasted several months. Chikurachki also erupted earlier in the 19th and 20th centuries.

This image was acquired by the Moderate Resolution Imaging Spectroradiometer (MODIS), aboard the Terra satellite, on April 24, 2003.