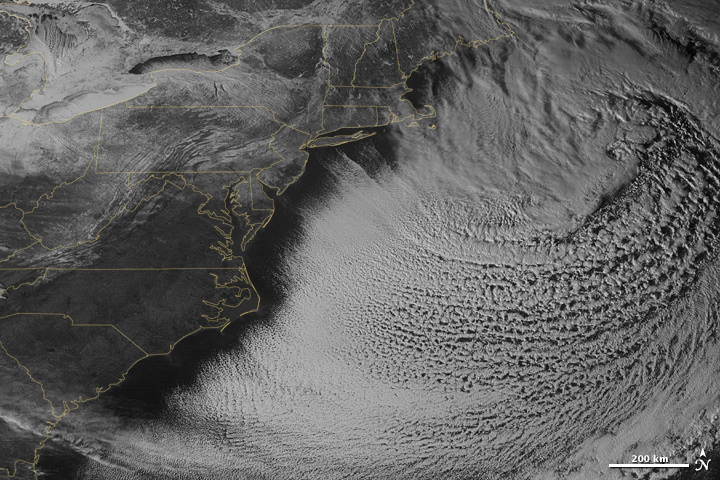 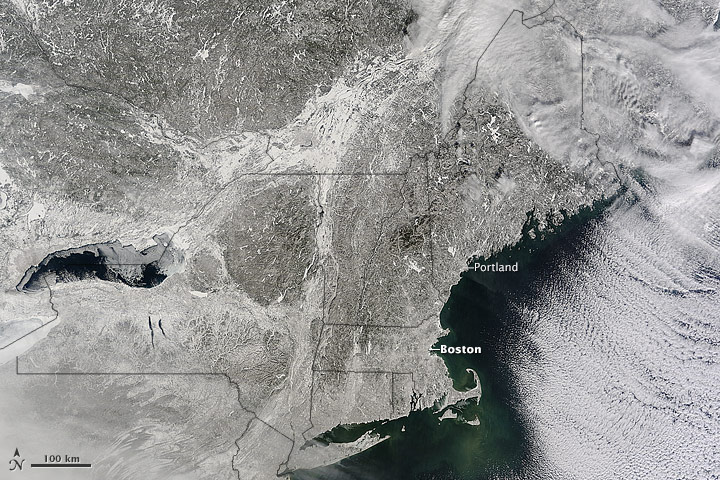 Yet another potent winter storm battered the northeastern United States on February 14-15, 2015. The nor'easter brought 12 to 20 inches (30 to 50 centimeters) of snow across much of eastern New England, along with tropical storm force winds over 60 miles (100 kilometers) per hour. The latest snowfall pushed Boston to its highest monthly total on record—58 inches and counting—and its third highest yearly snow total.

The top image was acquired by the GOES-East weather satellite at 3:45 p.m. Eastern Standard Time (20:45 Universal Time) on February 15, 2015, as the storm was mostly out to sea. Note the comma-like shape of the nor'easter, which spawned blizzard conditions at coastal locations. The official meteorological definition of a blizzard is three consecutive hours of falling or blowing snow with winds gusting above 35 miles (56 kilometers) per hour and visibility below one-fourth of a mile (0.4 kilometers).

The second image shows the snow-covered northeastern states as observed on February 16, 2015, by the Moderate Resolution Imaging Spectroradiometer (MODIS) on NASA’s Terra satellite. Cloud streets over the Atlantic Ocean in both images hint at the potent winds blowing across the East Coast from the Canadian interior. Following the blizzard, temperatures dropped as low as -30 degrees Fahrenheit (-34° Celsius) in parts of New England.

What the images do not show is snow depth. With the latest storm, nearly 8 feet (2.4 meters) of snow has fallen on the city of Boston in just three weeks. With temperatures persistently below freezing, very little snow has melted. According to National Climatic Data Center statistics the snow depth just south of Boston were roughly 42 inches (107 centimeters). Totals were above 30 inches (76 centimeters) in many locations in Maine, New Hampshire, and Massachusetts.

As of February 17, the snow depth near Boston was greater than in all but two reported locations in Alaska. It was significantly higher than the notoriously snowy states of Michigan, Wisconsin, and Minnesota. Only Buffalo, New York, had a higher snow pack.

On February 16-17, more snow and ice fell across the eastern United States from northern Mississippi all the way to Maine. 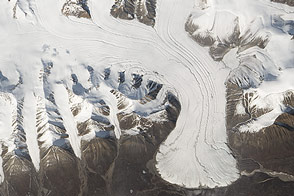