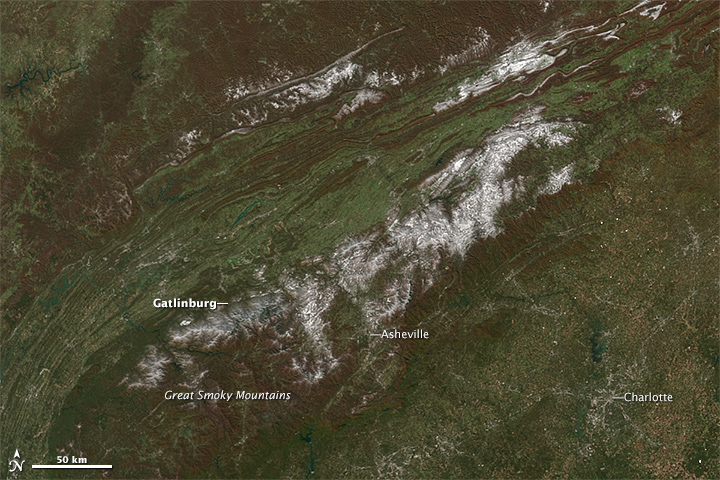 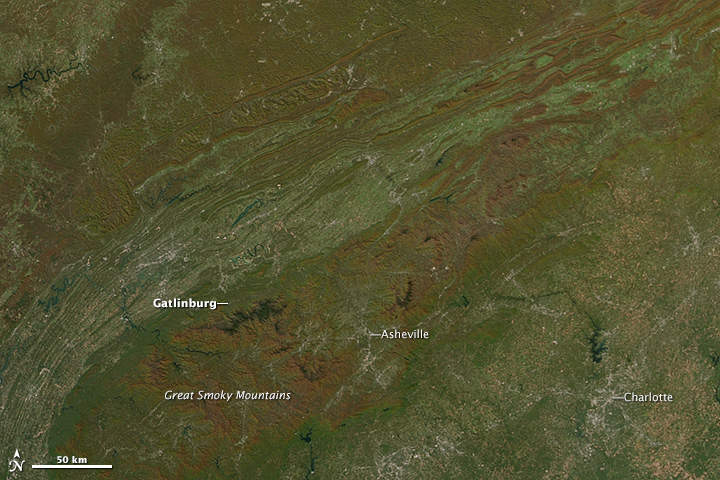 Whether they are made in Alberta (Clippers), Saskatchewan (Screamers), or Manitoba (Maulers), Canada periodically exports strong low-pressure weather systems to the United States in the winter. This week, the package of Arctic air, snow, and high winds was delivered a bit earlier than normal.

A potent weather system with origins in Manitoba moved south across the Great Lakes on Halloween and blew all the way to Florida, bringing snow and hard frost to regions that don't see either in some winters. The storm system then moved back up the U.S East Coast and pounded New England with a Nor'easter.

The images above show the southern Appalachian Mountain range, along the border of Tennessee, North Carolina, and South Carolina, as fall color was turned to winter white. These natural-color images were acquired by the Visible Infrared Imaging Radiometer Suite on the Suomi NPP satellite on November 2 and October 26, 2014.

When this “Manitoba Mauler”—as some National Weather Service forecasters and media outlets called it—reached the U.S. Midwest on October 31, it brought wind gusts of 69 miles per hour to Gary, Indiana, and wave heights approaching 22 feet on southern Lake Michigan. The next day, snow fell in the mountains of the southeastern United States and even in their eastern foothills. Temperatures dropped to 41 degrees Fahrenheit in Daytona Beach, Florida.

By November 2, the storm battered runners in the New York City Marathon with 40 mile per hour wind gusts, and 50 mph gusts were common up through New England, slowing air traffic. Heavy rain blew sideways in the wind throughout the Northeast, followed by snow at the tail end of the storm. In Maine, 18 locations reported at least a foot or more of snow, and Bangor and Caribou set records for earliest double-digit snow totals. More than 130,000 people lost power in Maine due to heavy, wet snow falling on trees and power lines. 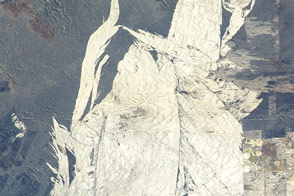