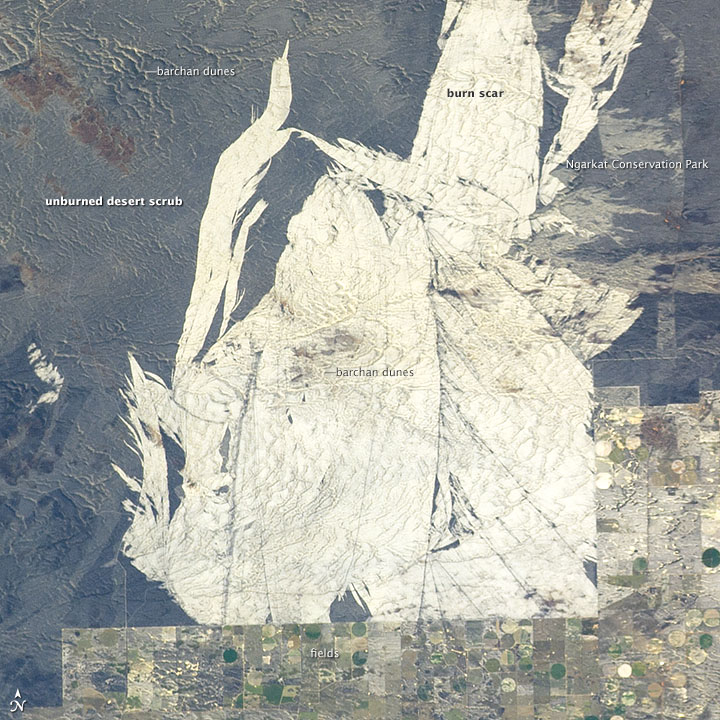 This photograph, taken by an astronaut on the International Space Station, shows the irregular area of a burn scar in Australia. Recent fires burned away the vegetation cover of desert scrub to reveal a sheet of white dune sand. The burn scars taper towards the north, indicating that winds from the south likely drove the fires away from start points on the agricultural fence line. For scale, the length of the fenceline is roughly 15 kilometers (9 miles).

Burn scars are often the most arresting and dominant patterns visible from aircraft and spacecraft when flying over semi-arid regions. At least five fire episodes can be identified by their feather-like shapes in this image. But Google Earth images of the same area—the extreme southeast corner of the state of South Australia—show quite different scar patterns from different years. Fires often start at or near rural, agricultural population centers. Human populations and fire hazards tend to go together in semi-arid areas.

Close-spaced, parallel lines within the white area are the curved forms of dozens of barchan dunes—horn-shaped dunes that point downwind. The patterns show that the dunes were formed by the dominant easterly winds, in contrast to the southerly winds responsible for the burn scars. Subtle dune shapes are visible in other parts of the image, including curved dune outlines under dark scrub vegetation. Small dune forms can be detected within the agricultural fields as slightly curved lines.

Astronaut photograph ISS041-E-55798 was acquired on October 2, 2014, with a Nikon D3S digital camera using a 145 millimeter lens, and is provided by the ISS Crew Earth Observations Facility and the Earth Science and Remote Sensing Unit, Johnson Space Center. The image was taken by the Expedition 41 crew. It has been cropped and enhanced to improve contrast, and lens artifacts have been removed. The International Space Station Program supports the laboratory as part of the ISS National Lab to help astronauts take pictures of Earth that will be of the greatest value to scientists and the public, and to make those images freely available on the Internet. Additional images taken by astronauts and cosmonauts can be viewed at the NASA/JSC Gateway to Astronaut Photography of Earth. Caption by M. Justin Wilkinson, Jacobs.

Recent fires burned away the vegetation cover of desert scrub to reveal a sheet of white sand and barchan dune patterns.