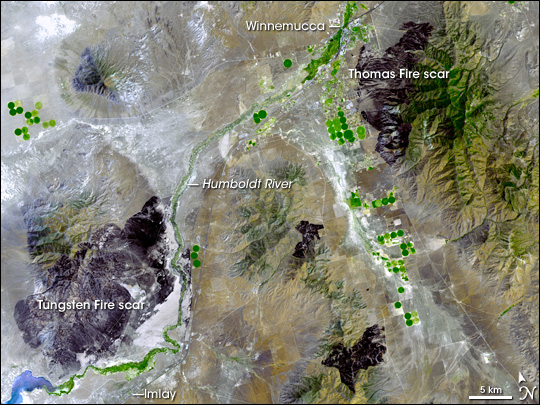 July 2007 was an active month for wildfires in the U.S. West, particularly Nevada. Early in the month, lightning triggered dozens of fires across the state. Two of the larger ones, the Tungsten and the Thomas Fires, occurred along the Humboldt River in northwestern Nevada. Although they were largely contained by mid-July 2007, the two scorched tens of thousands of acres areas in a single week. The Tungsten Fire north of Imlay, Nevada, scorched 62,000 acres (251 square kilometers). The neighboring Thomas fire southwest of Winnemucca, Nevada, burned 22,650 acres (92 square kilometers).

On July 22, 2007, the Advanced Spaceborne Thermal Emission and Reflection Radiometer (ASTER) flying on NASA’s Terra satellite captured this image of burn scars from the Thomas, Tungsten, and some smaller fires in Nevada. In this image, brown-black indicates a burn scar, green indicates vegetation, tan indicates bare rock, and blue indicates water. Throughout the image, burn scars blot the otherwise tan or green landscape like spilled ink.

A close look at the burn scars reveals that the fires did not burn evenly; less-damaged areas mix with blackened areas. The difference in burning rates may result from differences in vegetation and/or topography. The Thomas burn scar runs over the northwest slopes of the forested Sonoma Mountains, whereas the Tungsten scar climbs the southeastern slopes of the Eugene Range, north of Rye Patch Reservoir (bottom left corner).

Numerous round dots of varying shades of green line up in neat columns and rows in several parts of the image. These fields result from center-pivot irrigation systems that allow vegetation to grow lush and green in the otherwise arid landscape. The Humboldt River flows diagonally through the scene, lined with lush vegetation along its banks.

A statement released by the Nevada Department of Wildlife on July 21, 2007, expressed concern at the consequences of wildfires in Nevada during 2006 and 2007. The report stated that wildland fires had burned roughly 341,000 acres (1,380 square kilometers) since the beginning of 2007. More details about the Tungsten and Thomas Fires are available in the U.S. Forest Service’s InciWeb report for these incidents.

You can download a 15-meter-resolution KMZ file of the Tungsten and Thomas burn scars suitable for use with Google Earth.