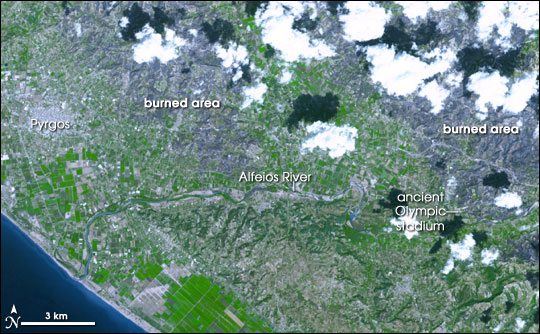 The wildfires that ravaged Greece in August 2007 narrowly missed destroying the birthplace of the Olympics, scorching areas to the west and north instead. On September 4, 2007, the Advanced Spaceborne Thermal Emission and Reflection Radiometer (ASTER) on NASA’s Terra satellite captured this image of burn scars the fires left behind.

In this image, green indicates vegetation; pale gray and beige indicate buildings, paved surfaces, and bare ground; and deep blue-gray indicates a burn scar. Clouds appear white, and water appears blue. Just east of the city of Pyrgos (or Pírgos) lies one burned area, which extends southward toward the Alfeios (or Alfiós) River. East of that is another, larger burned area, partially obscured by clouds. That burn scar stretches all the way to the ancient stadium. (These two burned areas are actually different lobes of a single burned area that stretches well outside the edges of this scene.) According to the BBC, the wildfire reached the edges of the original Olympic stadium and burned the yard of the archaeological museum. Firefighters held back the flames using planes, helicopters, and fire engines.

Throughout this image are signs of human presence, with rectangles of green and brown, indicating cultivated fields, interrupted by the burn scars. In this part of Greece, the areas closest to the coast appeared to have fared the best, showing large areas of bright green fields. While firefighters were able to protect the original Olympic site, many villages in the region were destroyed and dozens of people died. South of this area (visible in the large image), the fires burned all the way to the coast. Adding to the trouble, days after the fires broke out, a 4.7-magnitude earthquake struck roughly 14 kilometers (9 miles) east of Pyrgos, according to National Public Radio (NPR).

Although so many fires breaking out simultaneously had prompted allegations of arson, NPR reported that some environmentalists expressed skepticism at these claims. A lack of rain since the previous April left the area tinder-dry, and humidity levels, usually at or above 35 percent, had recently been between 10 and 15 percent. Whatever the original cause, high winds caused the flames to advance rapidly through the dry region. 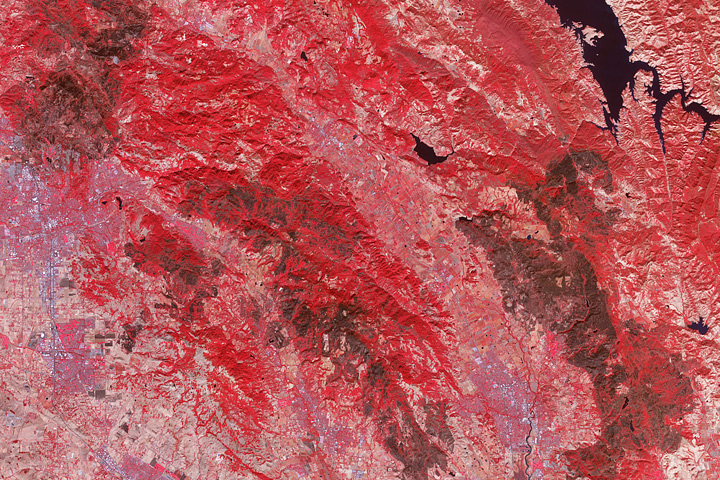