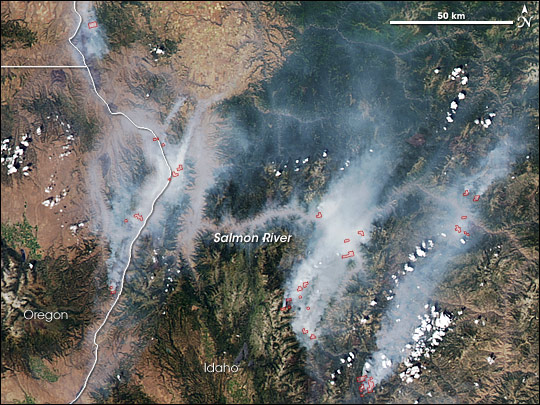 Dozens of forest fires burned across the mountains and canyons of west-central Idaho in late July 2007. Most of the fires were triggered by dry thunderstorms, which brought lightning and winds but scant rain to the area. The area is remote and rugged, occupied by the Salmon River Mountains. South of the Salmon River, the mountains are home to the Frank Church River of No Return Wilderness. Fires were also burning along the Snake River, which forms the border between Idaho and Oregon in this area.

This image of a few of the fires near the Salmon River was captured by the Moderate Resolution Imaging Spectroradiometer (MODIS) on NASA’s Aqua satellite on July 22. Places where MODIS detected actively burning fires are outlined in red. The forested slopes of the mountains appear dark green, with bare rock exposed at the highest elevations. Grassland and sagebrush terrain at lower elevations appears tan. Irrigated cropland is bright green. Smoke fills the valley of the Salmon River, which zigzags from east to west through the mountains. According to the National Interagency Fire Center report from July 23, several of the fires in the area were extremely active, with individual trees bursting into flame like torches and fire spreading through the forest canopy as well as along the ground.

Because fires are a naturally occurring phenomenon in many of the forests of the U.S. West, fire managers sometimes allow forest fires to burn within certain limits in some areas to improve natural resources. Fires can improve the ecosystem by destroying non-native plants, as well as by thinning brush and grass in the forest understory, reducing the severity of future fires. As the forest recovers, a mosaic of habitats for different species of plants and animals emerges from areas that burned. Some of the fires in this image are being allowed to burn to manage natural resources.

The wilderness character of the area can be a double-edged sword for firefighters. On the one hand, it is not densely populated, which can mean there are fewer people and less infrastructure in danger. On the other hand, the lack of infrastructure, including roads and water supplies, can make it more challenging to get firefighters and supplies to places where they are needed. Another challenge for firefighters is that designated wilderness areas often have strict rules for the type of intervention that is permitted while controlling fires. Vehicles and heavy equipment such as bulldozers, for example, may be prohibited in all but the most urgent situations.

Fires in the Northern Rockies