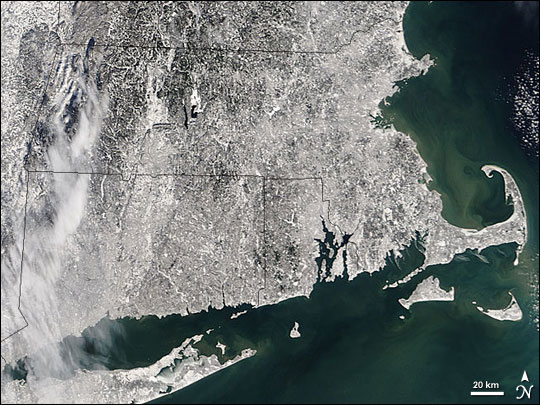 After two days of blustery weather, the skies cleared over Massachusetts on January 24, 2005. Along with other northeastern U.S. states, Massachusetts was slammed with a powerful blizzard on January 22 and 23 that shut down travel and businesses and extinguished power. The storm brought record snow to many places, but Massachusetts topped the list. The cities of Salem and Plymouth were buried in 38 inches (96.5 cm) of snow, and strong winds created drifts up to seven feet (2 meters) high, according to the National Weather Service.

This Moderate Resolution Imaging Spectroradiometer (MODIS) image, taken on January 24 by NASA’s Terra satellite, shows the effects of the storm on Massachusetts and its southern neighbors, Connecticut (left) and Rhode Island (right). New York’s Long Island is in the lower left corner of the image. The entire region is coated with snow, though clouds obscure the ground on the left side of the image.

The snow was accompanied by powerful hurricane-force winds that helped create white-out conditions and large snowdrifts. The wind also churned ocean waters around Cape Cod, leaving them milky with sediment.