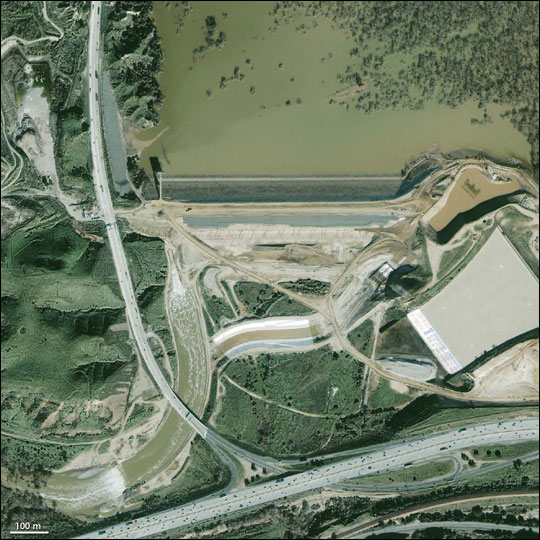 1938: Days of heavy rain pounded Southern California during late February and early March. Water pooled in the valleys, and ran off into raging rivers. The Santa Ana River and its tributaries sent walls of mud and water across Orange County, sweeping away everything in their path. It was the most destructive flood Southern California would see in the twentieth century. By April 1941, the Prado Dam was completed on the Santa Ana River in an effort to tame the worst flood plain west of the Mississippi. The 1938 floods did not prompt officials to build the Prado Dam—the project had been approved in 1936—but they are a grim reminder of the types of floods that could occur without control measures.

2005: Heavy rain hammered Southern California through much of January. This time, for a few brief days, the Santa Ana River was once again feared. On January 14, workers spotted a small leak on the Prado Dam. The dam had been under construction as part of an expansion project, and growing damp spots were found on the front of the dam in an area where new outlet gates were being built. Corona city officials evacuated over 800 homes below the dam while the U.S. Corp of Engineers inspected the dam and repaired the damage.

The leak occurred because of near record-high water levels in the reservoir behind the dam. The water spilled over a temporary construction dam built behind the permanent dam, and filled the construction site. Officials released water at a rate of 10,000 cubic feet per second, up from the normal 200-500 cubic feet per second, in an effort to lower water levels in the reservoir. When the above Ikonos image was taken on January 18, 2005, four days later, water flowing from the dam through the Santa Ana River still looked rough. The river below the dam is still swollen, running into the trees at the lower left corner of the image. (The flooded river banks are easier to see in the high-resolution image provided in the link above.) Water levels in the dam behind the reservoir may still be high. Trees that are surrounded by a pool of grey-green water may be part of a lake-side park, but they could also be part of the Prado Wetland, a large artificial wetland that covers 2,150 acres behind the dam.