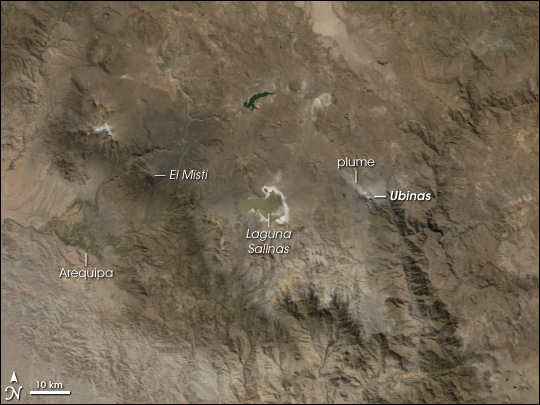 Ubinas Volcano in Peru emitted another volcanic plume of ash and/or steam on July 1, 2006, continuing its intermittent activity that began earlier in the year. The Moderate Resolution Imaging Spectroradiometer (MODIS) flying onboard NASA’s Terra satellite took this picture the same day. In this image, the volcano sends its plume toward the northeast. Other features of the region include El Misti Volcano, the settlement of Arequipa, and Laguna Salinas, a large salt lagoon. To the east of the volcano, but not shown in this image, is Lake Titicaca.

Ubinas is a stratovolcano composed of alternating layers of hardened lava, ash, and rocks. The upper portion of the volcano is made from lava flows from the Pleistocene. The depression (caldera) at the summit contains a cone of volcanic ash sporting a vent shaped like a funnel. Ubinas’s historical eruptions have been documented since the 16th century.

Ash and volcanic gas rose from the Ubinas Volcano in Southern Peru in late April and early May 2006, prompting evacuations. The volcano emitted more plumes in June, July, and August.