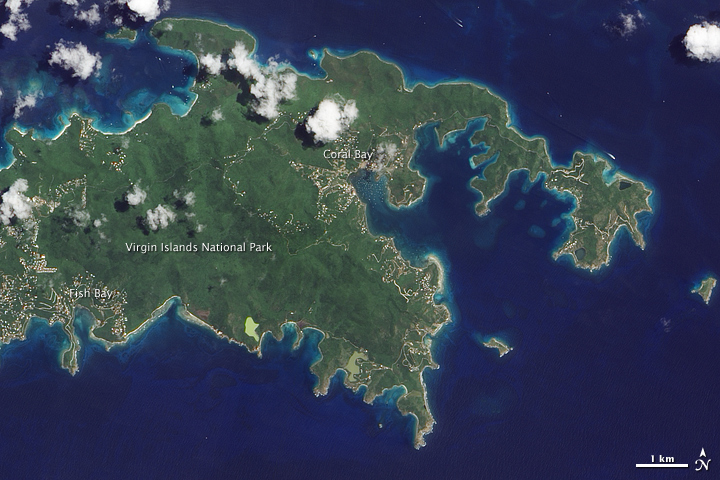 Part of the U.S. Virgin Islands, the island of St. John incorporates both a land-based national park and a sea-based national monument. First established in 1956 and later expanded by the U.S. Congress, the Virgin Islands National Park covers more than 7,000 acres (2,800 hectares). Coral Reef National Monument—established ten years ago this week by presidential proclamation—encompasses submerged lands within 3 miles (5 kilometers) of the St. John coast.

The Advanced Land Imager (ALI) on NASA’s Earth Observing-1 (EO-1) satellite captured this natural-color image of the eastern half of St. John on June 24, 2007. Settlements—marked by curving roads and light roofs—line the irregular coastline. The pinpoints of white in Coral Bay are probably boats.

The island’s interior is carpeted with varying shades of green. Temperatures vary little throughout the year, ranging between the low 80s to mid-90s Fahrenheit (mid-20s to mid-30s Celsius). Although the vegetation appears lush, much of it is second-generation growth, according to the U.S. National Park Service (NPS). During the colonial period, large swaths of the island were clear-cut to accommodate sugar cane production.

Along the fringes of the island, the complex seafloor of varying depths colors the water different shades of blue. The Coral Reef National Monument is comprised of interdependent and fragile ecosystems, including coral reefs, mangrove forests, and beds of seagrass. In addition to these ecosystems, the monument incorporates historical artifacts such as shipwrecks, which are rare in the Caribbean.