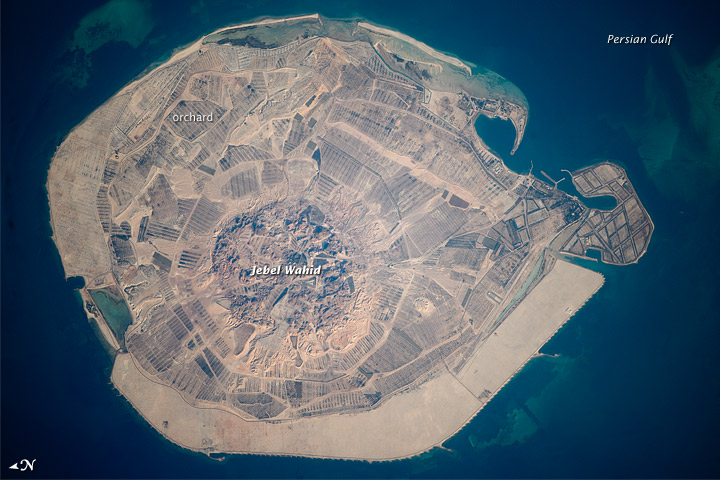 Sir Bani Yas Island is located in the Persian Gulf near the western coastline of the United Arab Emirates (UAE). Roughly 14 kilometers (9.7 miles) by 9 kilometers (6 miles), the island is the surface expression of a salt dome, which is a pocket of salt minerals that balloons upward into overlying layers of sedimentary rocks.

Salt domes start during past periods of alternating wet and dry climate. A common scenario is an enclosed basin that is alternately flooded and then subjected to extreme drying. High rates of evaporation deposit thick layers of salt minerals, such as common table salt and gypsum (a chalky mineral that is a major component of wallboard). These layers are eventually buried by sediments. If the salt layers are buried deeply enough, the pressure can cause them to flow. Salt has lower density than the surrounding rock, so it tends to flow upwards, pushing up the overlying layers of rock to form a dome. While many salt domes retain a cap of the youngest rock layers at the surface, in some cases the underlying salt extrudes all the way to the surface.

This astronaut photograph illustrates the varying character of surfaces on Sir Bani Yas. The central mountains of Jebel Wahid (image center) mark the location of the Sir Bani Yas salt dome. The dome has breached the surface but exposed salt, primarily gypsum, is eroded, leaving a rugged, insoluble cap made of fragments of the overlaying sedimentary and volcanic rocks. Sand and silt derived from the Jebel Wahid and surrounding gravel-covered areas form beaches along the outer edge of the island.

Sir Bani Yas Island was the personal retreat of the late Sheikh Zayed Bin Sultan Al Nahyan who was president of the UAE from 1971-2004. He established a nature preserve on the island for animals native to the Arabian Peninsula (including striped hyena, cheetah, oryx, ostrich, and gazelle) that is now open to the public. The numerous orchard plots that cover much of the island were part of a desert agricultural research program also started by the late Sheikh. Tan graded areas along the western and northeastern coast of the island (image bottom and image left) may be revegetated with additional plots or developed for other land uses.

Astronaut photograph ISS022-E-58538 was acquired on January 31, 2010, with a Nikon D3X digital camera fitted with an 800mm lens, and is provided by the ISS Crew Earth Observations experiment and Image Science & Analysis Laboratory, Johnson Space Center. The image was taken by the Expedition 22 crew. The image in this article has been cropped and enhanced to improve contrast. Lens artifacts have been removed. The International Space Station Program supports the laboratory as part of the ISS National Lab to help astronauts take pictures of Earth that will be of the greatest value to scientists and the public, and to make those images freely available on the Internet. Additional images taken by astronauts and cosmonauts can be viewed at the NASA/JSC Gateway to Astronaut Photography of Earth. Caption by William L. Stefanov, NASA-JSC.