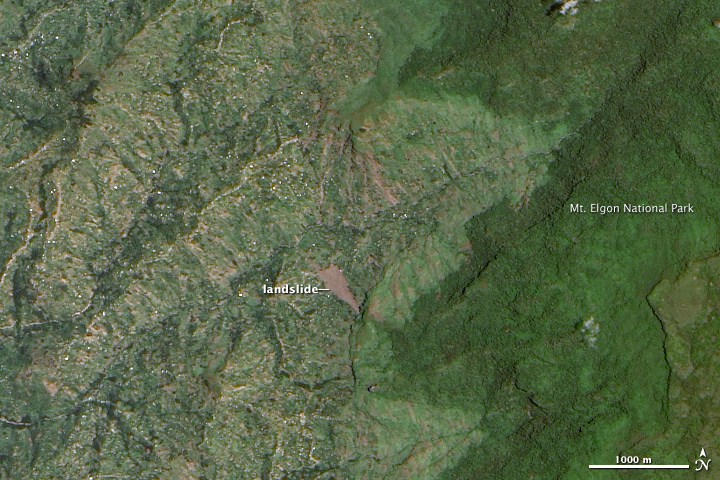 Heavy rains triggered these landslides on the steep slopes of Mt. Elgon in Uganda, on March 1, 2010. The newly exposed earth is slightly pink, raw compared to other patches of bare ground, which are lighter brown. As the older scars hint, landslides are common in the region, but the new landslides are much larger than previous slides. The slides buried three villages, leaving 83 dead and more than 300 missing as of March 8, reported the United Nations Office for the Coordination of Humanitarian Affairs.

Heavy rain caused the slides, but deforestation may have also played a role, said the Ugandan government. Dark green forest grows on the slope above the slide area. A strip of pale green land, free of settlements, separates the forest from the slide. This region had been deforested since 2007, according to the government analysis. On a steep slope, trees anchor the soil. Deforested mountains are very prone to landslides.

Freshly exposed earth traces down the slope of Mount Elgon in Uganda where a large landslide buried three villages on March 2, 2010. This cloud-free, natural color image is from March 11.