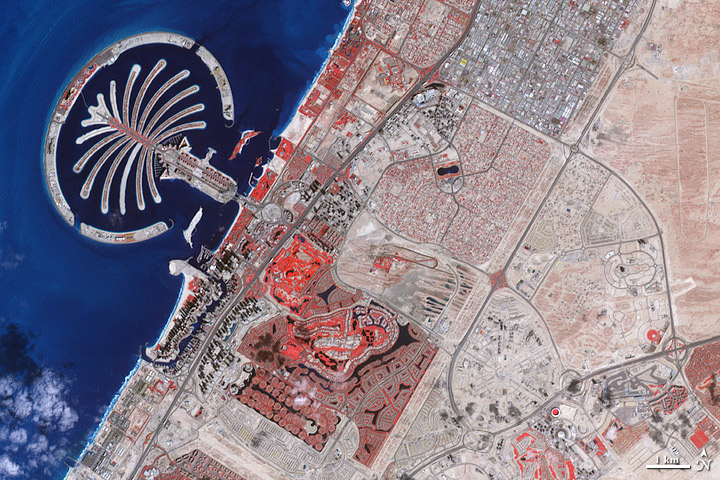 Part of the United Arab Emirates, the resort town of Dubai entered a period of dramatic urbanization at the beginning of the twenty-first century. Lacking oil, Dubai built its growth on finance, real estate, and tourism. With no surface water, few aquifers, and little rainfall, the city used desalinization plants to convert ocean water to freshwater, ornamenting the city with golf courses, gardens, and palm trees. Gigantic palm trees also sprouted along the coast—artificial islands made from sea-floor sand protected by rock breakwaters.

Compared to an image acquired in February 2009, this image shows little change, partly because most of the visible terrain is already developed, but also perhaps due to an economic decline that began in early 2009. Some additional development appears in the right half of the image, where new roads and clusters of buildings appear in what was previously sparsely vegetated land. A bright red circle not far from the right edge of the image shows where a manicured landscape has been watered. One of the accessory islands near Palm Jumeirah also glows bright red, indicating more well-watered vegetation.

Maintaining golf courses, gardens, and water parks is a challenge for any city in the United Arab Emirates. Rainfall is sparse and unpredictable, and less than 1 percent of the country’s land is arable. With many nonrenewable aquifers tapped, the nation has turned to alternate sources. Dubai relies heavily on desalination of ocean water, although the process has high energy requirements, and the reuse of wastewater.