An Earth-observing satellite has observed one of the largest landslides not caused by an earthquake that scientists have observed in a decade. The landslide occurred in Chin, a remote state in western Myanmar (Burma), after slow-moving Tropical Storm Komen drenched the area in July 2015.

The Global Precipitation Measurement (GPM) core observatory observed rain rates of 150 millimeters (5.9 inches) per hour as Komen moved ashore from the Bay of Bengal on July 30. The intense rainfall triggered destructive flooding and numerous landslides. According to some estimates, more than 17,000 homes were destroyed in Myanmar, 46 people were killed, and hundreds of thousands of people were affected by the storm.

For months after the storm, monsoon clouds prevented satellites from collecting visible light imagery of Chin, but scientists at Columbia University—Colin Stark and Göran Ekström—have been monitoring data collected by a global network of seismic sensors for signs of landslides in the region. The scientists found evidence of three large slides, including an exceptionally large event that moved 395 million tons of material.

On October 23, 2015, clouds cleared enough for the Advanced Land Imager (ALI) on the Earth Observing-1 satellite to capture a view of several landslides in Chin, including a massive slide northeast of Tonzang. In the image above, soil and debris from the landslide appears tan/brown in contrast to the green forests. Streams appear as narrow strips of brown because of mud and sediment washed away by the floods. The lower image shows the same area on November 8, 2014. Turn on the comparison tool to alternate between the two images.

“The length—or runout—of this landslide is enormous for this region—about 5.9 kilometers (3.6 miles) from tip to toe,” noted Stark, after he and Ekström had analyzed the satellite and seismic data. The only larger landslide that has occurred since 2004 was the Daguangbao slide in China, but that one was triggered by a magnitude 8.0 earthquake. The Tonzang landslide lasted for approximately 160 seconds, and debris moved at a maximum speed of 50 meters per second—longer and faster than most landslides.

The slide began on an upper slope of a mountain in the lower part of the image, and debris slid north into a nearby valley. The debris dammed several small creeks, creating new temporary lakes. The natural dams could fail as lake levels rise, potentially causing floods downstream. However, the slide occurred in a remote area, and the nearest community is 35 kilometers (22 miles) downstream. Note that there are three other sizable landslides visible in the image to the northeast, west, and southwest of the main debris field. View the large image to see evidence of several other landslides in nearby mountainous areas. 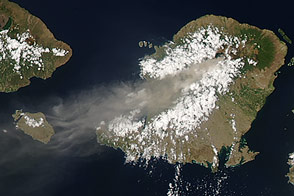