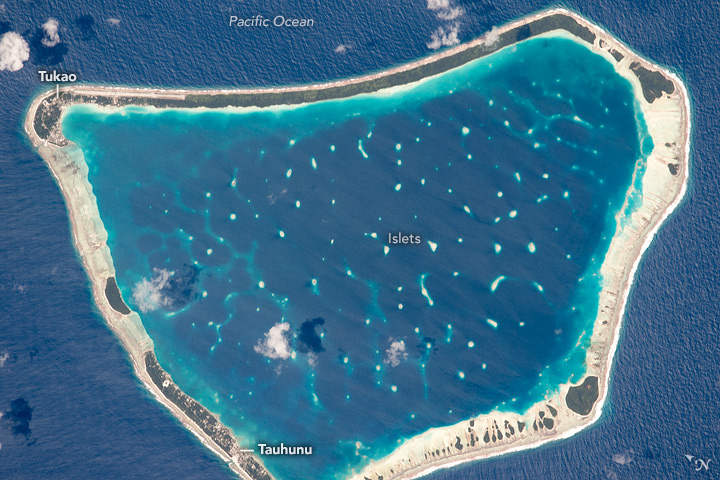 Using a high-magnification lens, an astronaut photographed almost the entire 10.5-kilometer long (6.5 mile) Manihiki Island, which lies in the middle of the Pacific Ocean. Manihiki is one of the larger islands in the remote Cook Island chain.

From space, Manihiki has the hallmarks of a classic atoll, with its fringing coral reef and a central lagoon. The coral lives in the warm, shallow waters which appear as the light blue zones around the main coastline and the numerous small islets within the lagoon. Most of the main atoll is made of sandy beaches without vegetation; it appears white or cream due to dead coral broken up by waves. Soils develop on the highest parts of these beaches, supporting dense stands of dark green trees. A few clouds cast shadows on the water.

Two small towns—Tauhunu and Tukao—appear as clusters of small bright patches etched into the forest. Aircraft land at the runway in Tukao after flying from New Zealand, which is 3,650 kilometers (2270 miles) to the southwest. Tourism is the main economic activity on the atoll, with diving in the lagoon and fishing in the waters outside it as the major attractions. Manihiki also produces rare black pearls, which are harvested from the local species of oyster.

The Cook Islands are an independent nation, in “free association” with New Zealand. The population is small (15,000 people in 2011) and situated mostly on Manihiki and the 14 other large islands.

Astronaut photograph ISS045-E-837 was acquired on September 13, 2015, with a Nikon D4 digital camera using an 1150 millimeter lens, and is provided by the ISS Crew Earth Observations Facility and the Earth Science and Remote Sensing Unit, Johnson Space Center. The image was taken by a member of the Expedition 45 crew. The image has been cropped and enhanced to improve contrast, and lens artifacts have been removed. The International Space Station Program supports the laboratory as part of the ISS National Lab to help astronauts take pictures of Earth that will be of the greatest value to scientists and the public, and to make those images freely available on the Internet. Additional images taken by astronauts and cosmonauts can be viewed at the NASA/JSC Gateway to Astronaut Photography of Earth. Caption by M. Justin Wilkinson, Texas State University, Jacobs Contract at NASA-JSC. 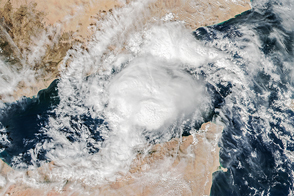