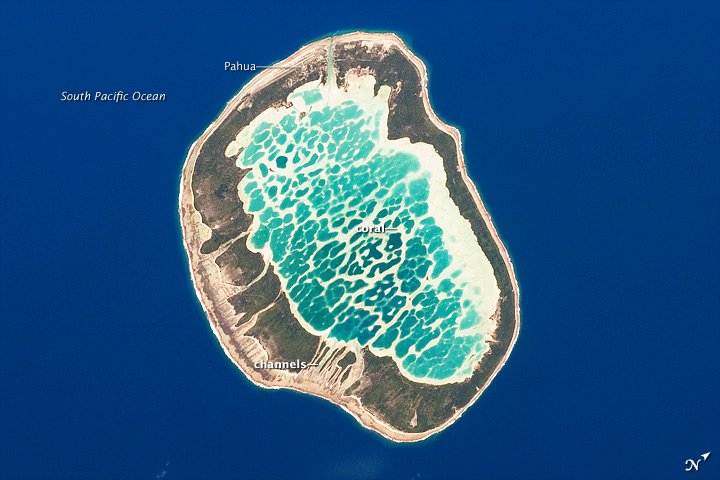 The Tuamotu Archipelago is part of French Polynesia, and forms the largest chain of atolls in the world. This astronaut photograph features Mataiva Atoll, the westernmost atoll of the Tuamotu chain. An atoll is a ring-shaped island that encloses a central lagoon. This distinctive morphology is usually associated with oceanic islands formed by volcanoes; coral reefs become established around the partially submerged volcanic cone. Over geologic time the central volcano becomes extinct, followed by erosion and subsidence beneath the sea surface, leaving the coral reefs as a ring around (or cap on) the submerged island remnant. Coral reefs exposed above the sea surface in turn experience erosion, sedimentation, and soil formation, leading to the establishment of vegetation and complex ecosystems—including in many cases human habitation.

Mataiva Atoll is notable in that its central lagoon includes a network of ridges (white, image center) and small basins formed from eroded coral reefs. Mataiva means “nine eyes” in Tuamotuan, an allusion to nine narrow channels on the south-central portion of the island. The atoll is sparsely populated, with only a single village—Pahua—located on either side of the only pass providing constant connection between the shallow (light blue) water of the lagoon and the deeper (dark blue) adjacent Pacific Ocean. Much of the 10-kilometer- (6-mile-) long atoll is covered with forest (greenish brown). Vanilla and copra (dried coconut) are major exports from the atoll, but tourism is becoming a larger part of the economy.

Astronaut photograph ISS024-E-11914 was acquired on August 13, 2010, with a Nikon D2Xs digital camera using a 400 mm lens, and is provided by the ISS Crew Earth Observations experiment and Image Science & Analysis Laboratory, Johnson Space Center. The image was taken by the Expedition 24 crew. The image in this article has been cropped and enhanced to improve contrast. Lens artifacts have been removed. The International Space Station Program supports the laboratory as part of the ISS National Lab to help astronauts take pictures of Earth that will be of the greatest value to scientists and the public, and to make those images freely available on the Internet. Additional images taken by astronauts and cosmonauts can be viewed at the NASA/JSC Gateway to Astronaut Photography of Earth. Caption by William L. Stefanov, NASA-JSC.

Submerged coral reefs in the central lagoon of Atafu Atoll color the dark waters of the Pacific Ocean an electric blue in this astronaut photo from January 6, 2009.