Flooding on the Chenab River, Pakistan 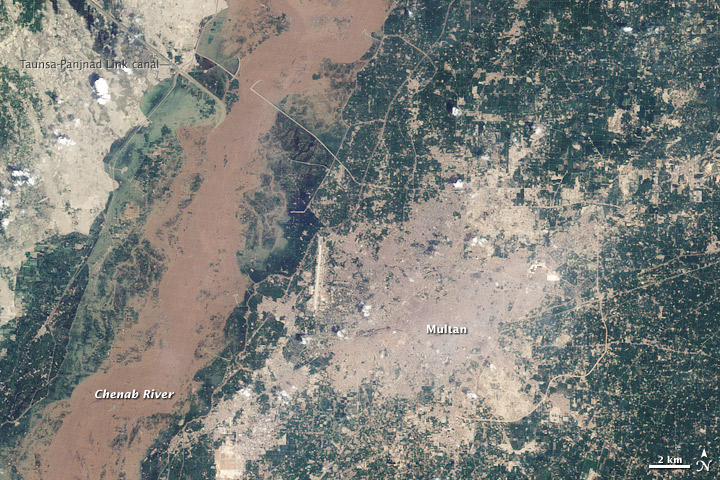 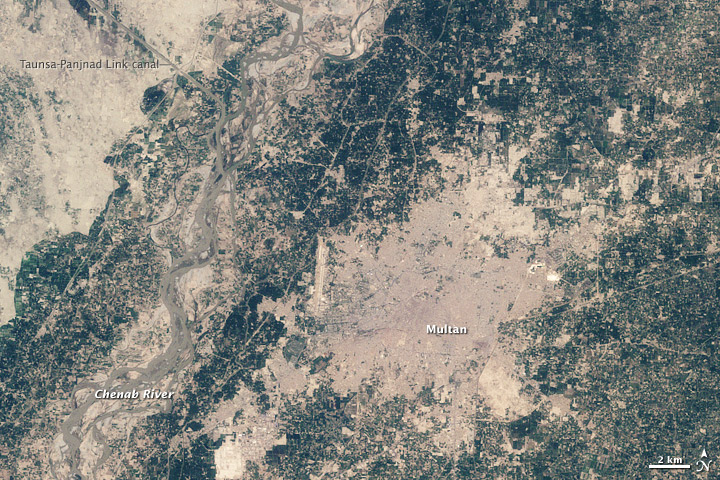 By late August 2010, the floodwaters that had inundated northern Pakistan slowly began to recede, although the flooding left behind a wide swath of destruction throughout the country. As of August 21, 2010, the Chenab River remained well above its normal level near the central-Pakistan city of Multan, as the top natural-color image from the Landsat 5 satellite shows.

The Chenab River normally consists of braided channels near the city of Multan, as shown in the lower image from August 2, 2009. In 2010, muddy waters filled the entire riverbed and pushed outward onto the floodplain. Water on the floodplain is especially apparent near the airport, marked by the lone north-south runway. Muddy brown and green flood water covers what had been rectangular farm fields around the Taunsa-Panjnad Link canal.

Flooding is not obvious in the city of Multan, but outlying regions closer to the river were clearly affected. The Washington Post reported that throughout the country, some 1.2 million houses, 10,000 schools, 35 bridges, and nearly one-tenth of Pakistan’s national highway system had been damaged or completely destroyed. Broken sewer lines and tainted wells left millions of residents—many of them children and elderly—vulnerable to waterborne diseases.

As river levels slowly fell in the north, farmers returned to mud-caked fields to find livestock dead or washed away. The torrential monsoon rains in the summer of 2010 inundated much of Pakistan’s prime cropland. Although fields in the north might be planted in time for the next harvest—provided farmers weren’t compelled to use their seed as food—many fields in southern Pakistan remained underwater. The flood surge pushed southward down the Indus, submerging cities near the coast.

Acquired August 21, 2010, this natural-color image shows the Chenab River, near the city of Multan, Pakistan, in flood.