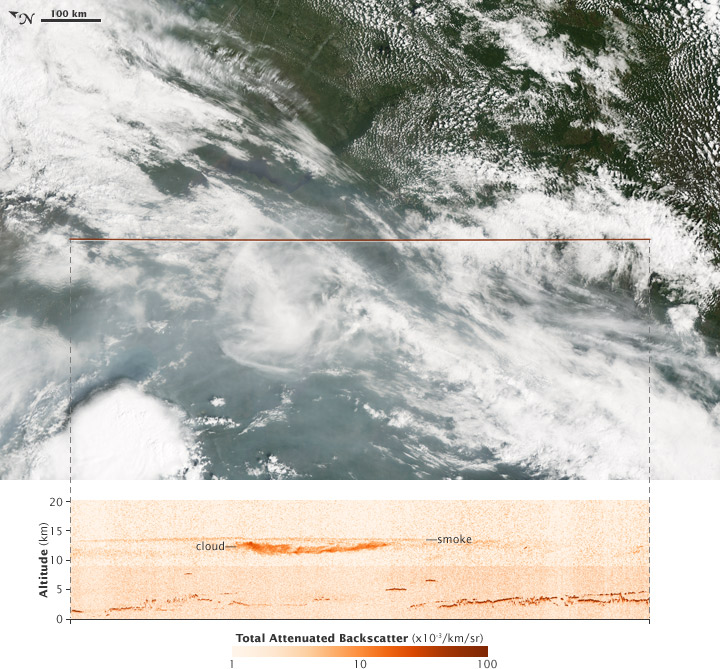 While intense fires burned in western Russia in the summer of 2010, a layer of smoke was spreading across the stratosphere, more than 12 kilometers above Earth’s surface. Few things have the power to send aerosol particles that high into the atmosphere. Until a decade ago, most scientists thought that only a volcano could do so. However, meteorologist Michael Fromm of the U.S. Naval Research Laboratory, has shown that large, fire-generated clouds can also inject particles high in the sky.

This blend of images from the Cloud-Aerosol Lidar and Infrared Pathfinder Satellite (CALIPSO) and the Moderate Resolution Imaging Spectroradiometer (MODIS) on NASA’s Aqua satellite provides rare evidence that fire clouds can pull smoke into the stratosphere.

The background image from MODIS provides a true-color view of far northern Russia on August 1, 2010, and the red line indicates the path of the CALIPSO satellite and its laser. CALIPSO sends pulses of laser light (lidar) down through the atmosphere and records the reflections to generate a profile of what's in the air. The strongest return signal comes from clouds.

The lower image in this set shows the data from CALIPSO. A layer of low clouds creates the dark red line along the lower part of the profile. One towering cloud reached into the stratosphere, between 10 and 15 kilometers in altitude. A thin, even layer of aerosols caps the cloud and surrounds it on either side.

The towering cloud appears circular and surrounded by hazy, gray-white smoke in the background MODIS image. Weather models and other satellite data reveal that it formed over fires in western Russia on July 30, then drifted northward.

The cloud is a pyrocumulonimbus, a powerful thunderstorm that forms over large fires. Fires heat the air, pushing it high into the atmosphere where it can cool and form clouds with ice crystals. The crystals conduct electricity, forming a strong, dangerous thunderstorm. Pyrocumulonimbus clouds can produce strong winds and tornadoes that can further fuel the fire’s growth.

However, this image shows one of the few pyrocumulonimbus clouds that have ever been documented, so it isn’t clear how often fires put aerosols in the stratosphere and how large an impact they have on weather and climate.

To see how Fromm used several NASA satellites together to document the pyrocumulonimbus cloud over western Russia, please see Russian Firestorm: Finding a Fire Cloud from Space on the Earth Observatory.

This profile of the atmosphere provides a rare view of a towering fire-formed thunderstorm and the smoke it injected high into the atmosphere.