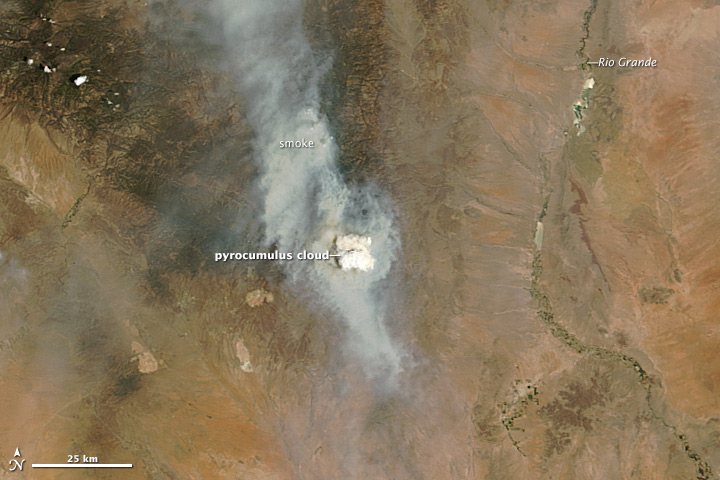 On June 12, 2013, the Moderate Resolution Imaging Spectroradiometer (MODIS) on NASA’s Aqua satellite captured this image of the Silver fire burning east of Silver City, New Mexico. In addition to producing gray smoke plumes, the fire spawned a pyrocumulus cloud—a tall, cauliflower-shaped cloud that billowed up above the smoke.

Pyrocumulus clouds are similar to cumulus clouds, but the heat that forces the air to rise—which leads to cooling and condensation of water vapor—comes from fire instead of sun-warmed ground. In satellite images, pyrocumulus cloud appear as opaque white patches hovering over darker smoke.

Scientists monitor pyrocumulus clouds closely because the clouds can inject smoke and pollutants high into the atmosphere. As pollutants are dispersed by wind, they can affect air quality over a broad area. As noted by the University Maryland at Baltimore County (UMBC) Smog Blog, the smoke from the fire contributed to elevated concentrations of particulate matter over much of the southeastern United States on June 13, 2013.

A preliminary analysis by University of Wisconsin atmospheric scientist Scott Bachmeier indicated that the maximum height of the pryocumulus cloud from the Silver fire was between 10 and 11 kilometers (6 and 7 miles). The temperature at the top of the clouds was between -45°C to -50°C, about 20 degrees warmer than the temperatures at the top of other nearby clouds that were not produced by fires. 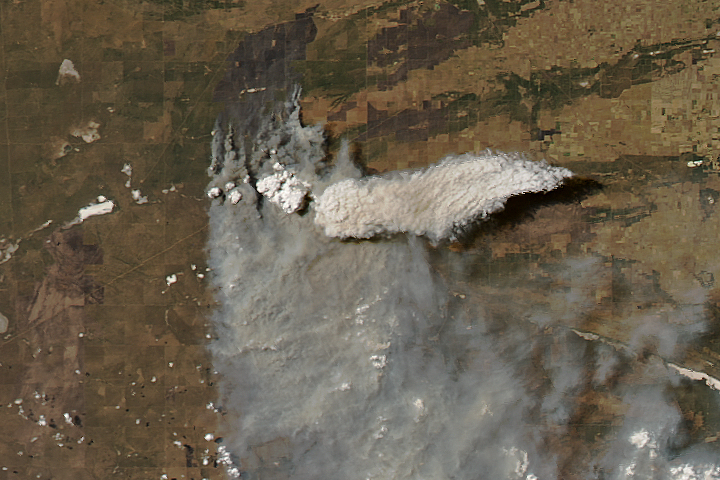 A Fire Cloud in Argentina

The heat from a wildfire can create its own weather.