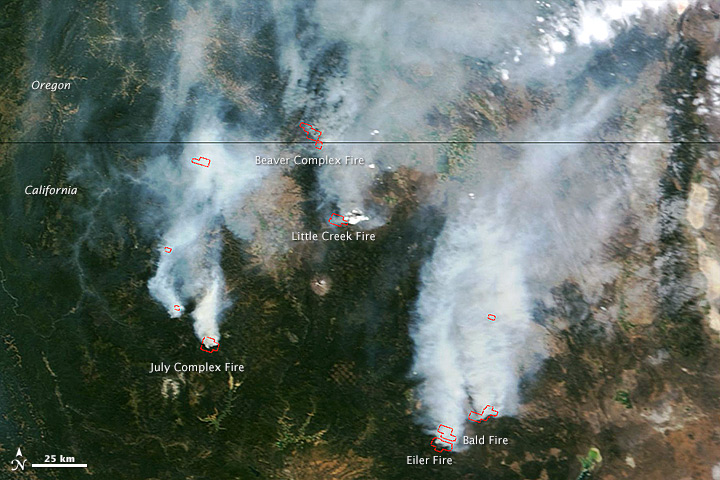 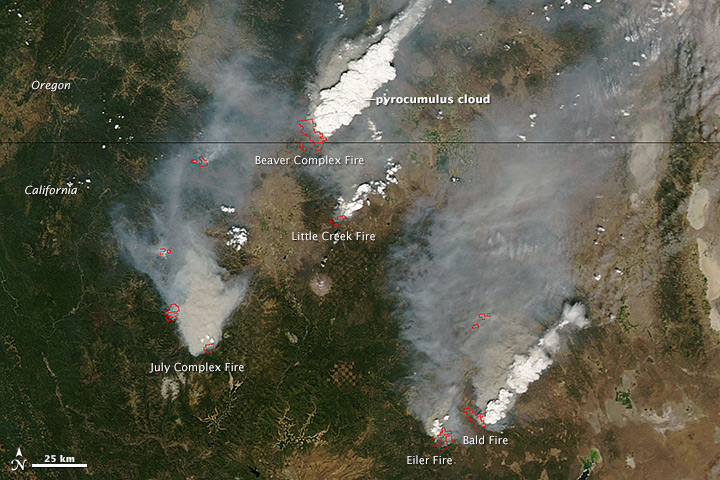 With much of California experiencing exceptional drought, vegetation in the Golden State is drier than normal and primed to burn. And burning is exactly what happened in August 2014 when lightning ignited several fast-moving fires. More than 100,000 acres (400 square kilometers) were charred in a few days as fires raged through forests and grasslands in northern California.

The pair of natural-color images documents the evolution and rapid expansion of the fires. Many areas of active burning expanded significantly between the satellite overpasses, as smoke plumes blossomed into towering pyrocumulus clouds. The change was most dramatic over the Beaver Complex fire along the border of California and Oregon.

Pyrocumulus clouds—sometimes called “fire clouds”—are tall, cauliflower-shaped, and appear as opaque white patches hovering over darker smoke in satellite imagery. Pyrocumulus clouds are similar to cumulus clouds, but the heat that forces the air to rise (which leads to cooling and condensation of water vapor) comes from fire instead of sun-warmed ground. Under certain circumstances, pyrocumulus clouds can produce full-fledged thunderstorms, making them pyrocumulonimbus clouds. 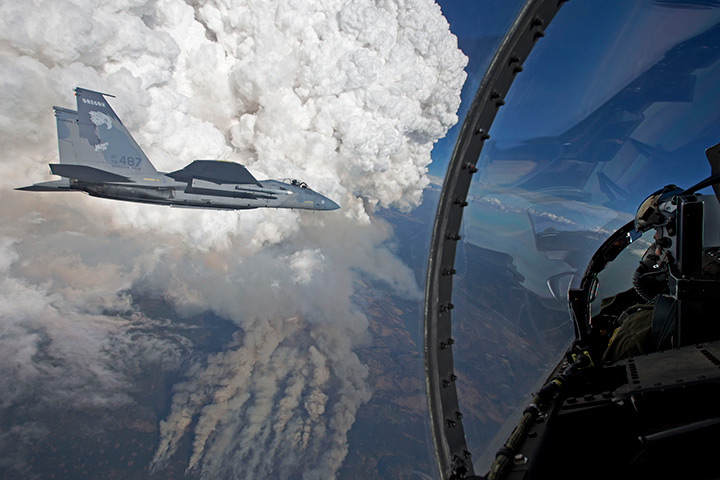 Scientists monitor pyrocumulus clouds closely because they can inject smoke and pollutants high into the atmosphere. As pollutants are dispersed by wind, they can affect air quality over a broad area. In this case, the outburst of pyrocumulus activity lofted a large amount of smoke high into the atmosphere, and winds pushed it north and east over Oregon. On August 3, 2014, the Ozone Mapping Profiler Suite (OMPS) on the Suomi NPP satellite detected the smoke as it passed over Oregon and drifted toward Idaho and Montana. (Click on the second image for a wider view of the scene.)

While fire clouds occur with some regularity, it’s rare for Aqua to capture images of such mature pyrocumulus clouds. Because of their orbits, Terra always crosses the equator in the morning and Aqua always crosses in the early afternoon (local time). Since pyrocumulus clouds are most developed in the late afternoon or evening, they tend to look small and immature in MODIS imagery.

“There have been a few other occasions when Aqua or even Terra captured mature pyrocumulus clouds, and it is always a godsend scientifically because of all the wavelengths that MODIS offers for analysis,” noted Naval Research Laboratory meteorologist Mike Fromm. In all, MODIS collects data in 36 separate bands, or groups of wavelengths.

The bottom two images, photographs taken from an F-15C, show a much closer view of a developing pyrocumulus cloud above the Oregon Gulch fire, a part of the Beaver Complex fire. They were taken from an Oregon Air National Guard F-15C by James Haseltine on July 31, 2014, at 8:20 PM Pacific Daylight Time. 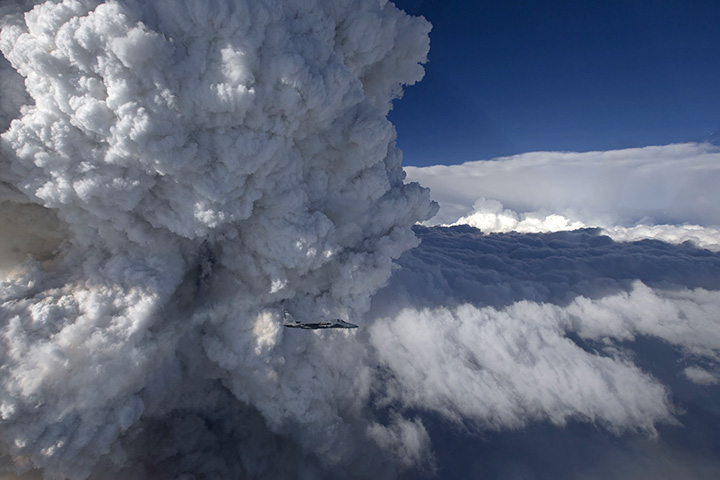 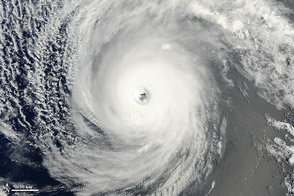