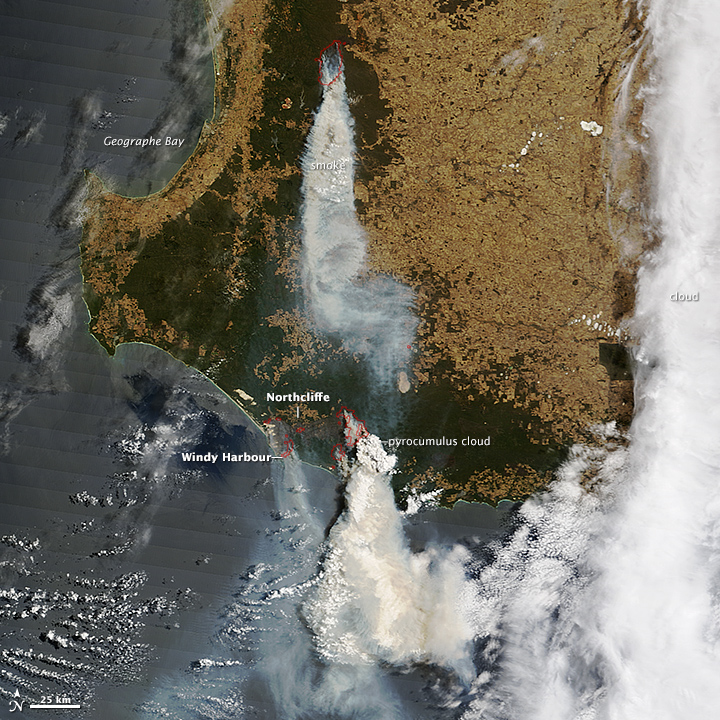 In February 2015, two large bush fires menaced communities in southwestern Australia. One burned east of Northcliffe. The other, more than 100 kilometers (60 miles) to the north, charred forest in Lane Poole Conservation Reserve near Boddington. Both fires were triggered by lightning storms, and strong winds and dry weather caused them to grow rapidly.

As of February 4, 2015, the fire threatening Northcliffe had charred 61,000 hectares (240 square miles). According to media reports, authorities were calling some homes in the path of the fire “undefendable.” Fire authorities have urged Northcliffe residents to evacuate. Residents of Windy Harbour, however, have been urged to remain and shelter on the beach if necessary because the only road out of town is blocked by the blaze.

Pyrocumulus clouds—sometimes called “fire clouds”—are visible above the smoke near Northcliffe. These clouds are tall, cauliflower-shaped, and appear in satellite imagery as opaque white patches hovering over darker smoke. Pyrocumulus clouds are similar to cumulus clouds, but the heat that forces the air to rise (which leads to cooling and condensation of water vapor) comes from fire instead of the sun-warmed ground. Under certain circumstances, pyrocumulus clouds can produce full-fledged thunderstorms, making them pyrocumulonimbus clouds.

Scientists monitor pyrocumulus clouds closely because they can inject smoke and pollutants high into the atmosphere. As pollutants are dispersed by wind, they can affect air quality over a broad area. In this case, the outburst of pyrocumulus activity lofted a large amount of smoke high into the atmosphere. On February 5, the Ozone Mapping Profiler Suite (OMPS) on the Suomi NPP satellite detected the smoke as winds blew it south. 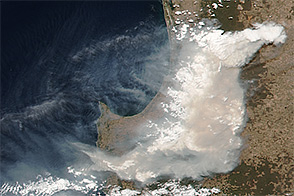 A fast-moving blaze destroyed 128 homes in Yarloop, a town in Western Australia.