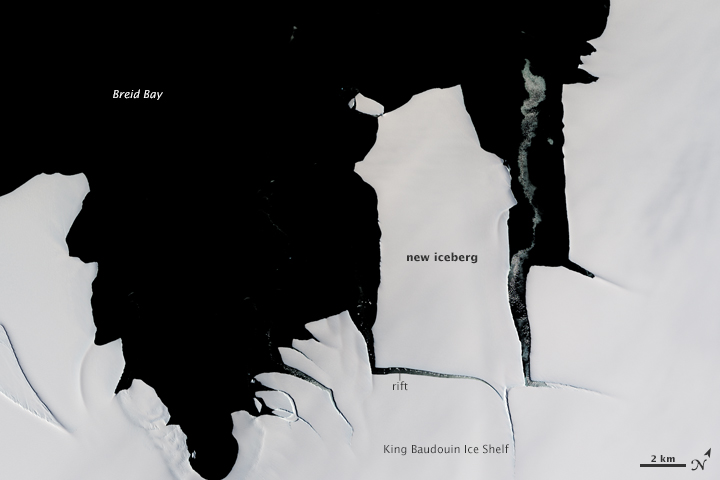 While large icebergs calve regularly from fast-flowing ice shelves in West Antarctica, the coast of cooler, drier East Antarctica tends to be less active. That made it a mild surprise when a 70-square-kilometer chunk of ice broke off from the King Baudouin Ice Shelf in January 2015. The last time that part of King Baudouin calved such a large iceberg was in the 1960s.

A growing rift near the edge of the glacier was visible to satellites for several weeks before the ice finally broke loose. The Operational Land Imager (OLI) on Landsat 8 acquired this image on January 24, 2015. While clouds obscured Landsat 8’s view of the new berg after January 25, a radar aboard the European Space Agency’s Sentinel-1 satellite captured an image of the iceberg on January 28, showing it moving away from the ice shelf. The new iceberg is now drifting in Breid Bay off of Queen Maud Land.

The formation of new icebergs from ice shelves is a normal process. Ice shelves are platforms of floating ice that extend out over the water from ice sheets on land. As snow falls adds mass to the ice sheet, its glaciers flow naturally seaward and chunks inevitably break off. Since ice shelves are already floating on the ocean, an iceberg that calves from an ice shelf does not affect sea level.

Does the birth of this iceberg suggest that King Baudouin Ice Shelf is weakening? Probably not. In an interview (below) published by the International Polar Foundation, Université Libre de Bruxelles (ULB) glaciologist Reinhard Drews explained that ice velocity measurements dating back to the 1960s suggest the ice shelf has not changed much in recent decades. 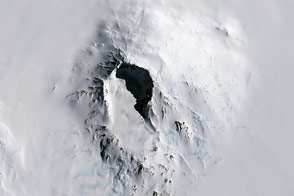