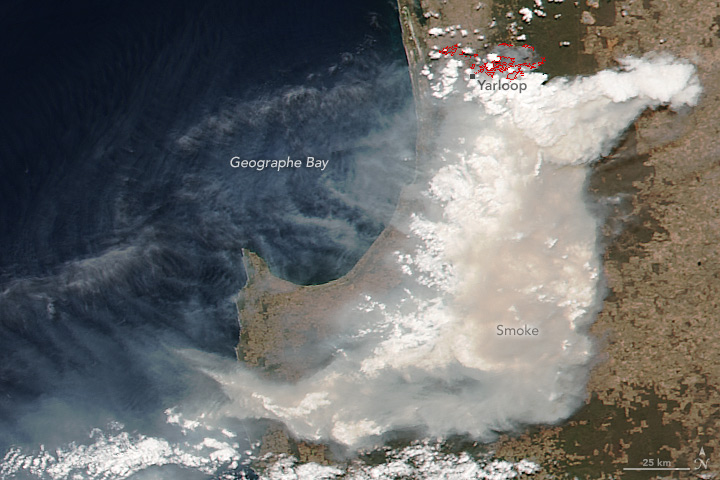 In September 2015, Australian authorities warned that the southwestern part of Western Australia faced an elevated risk during the upcoming bushfire season. Declines in rainfall over the past few years had made the region a tinderbox.

On January 6, 2016, the predictions became reality when lightning triggered a fire in Lane Poole Reserve. The blaze spread rapidly, moving southwest until it overran Yarloop, a small town about 120 kilometers south of Perth. In the process, the fire destroyed 128 homes and 41 other structures, including bridges and community buildings, according to the Department of Fire and Emergency Services. Two Yarloop residents were killed and four firefighters were injured. As of January 11, 2016, the fire had charred 71,410 hectares (276 square miles).

The fire burned so vigorously that it fueled its own weather by creating a pyrocumulus—or “fire cloud.” Pyrocumulus clouds are similar to cumulus, but the heat that forces the air to rise (which leads to cooling and condensation of water vapor) comes from fire instead of the sun-warmed ground.

Scientists monitor pyrocumulus clouds because they can inject smoke and pollutants high into the atmosphere. As pollutants are dispersed by wind, they can affect air quality over a broad area. NASA’s OMPS blog has imagery of the smoke on January 7, 8, and 9 as detected by the Ozone Mapping Profiler Suite (OMPS) on Suomi NPP. After the fire lofted smoke high into the atmosphere, winds transported it south, away from populated areas.

A fast-moving blaze destroyed 128 homes in Yarloop, a town in Western Australia.