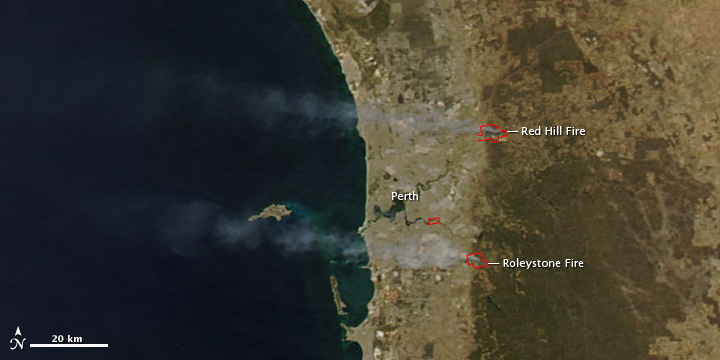 A large wildfire burning on the soutskirts of Perth, Australia, destroyed 71 buildings and damaged 32 more between February 6 and February 8, 2011. This image shows the fire shortly after it started on February 6.

The Moderate Resolution Imaging Spectroradiometer (MODIS) on NASA’s Aqua satellite took the image at 2:20 p.m. local time. The instrument detected three fires, marked in red, including the damaging Roleystone Fire southeast of Perth. The second fire, the Red Hill (Gidgegannup) Fire, was burning in a less populated area near the John Forrest National Park. Both fires are in the darker, tree-covered hills east of the city, and both forced evacuations. The third fire is smaller and closer to the city.

Strong wind blew plumes of smoke west from the two big fires. On February 6, winds were blowing steadily at about 20 miles per hour (30 kilometers per hour) with gusts as high as 40 miles per hour (64 kph), hampering fire-fighting efforts. The strong winds helped ignite the Red Hill Fire on February 5 when a tree branch fell into a power line. Though the fire burned about 1,170 hectares, no structures were damaged, reported the Fire and Emergency Services Authority of Western Australia (FESA).

The Roleystone Fire started accidently from a spark from a power tool (a grinder), said FESA. After burning about 430 hectares, the Roleystone Fire was under control on February 8. Neither fire was visible in subsequent MODIS images.