A Fire Cloud in Argentina 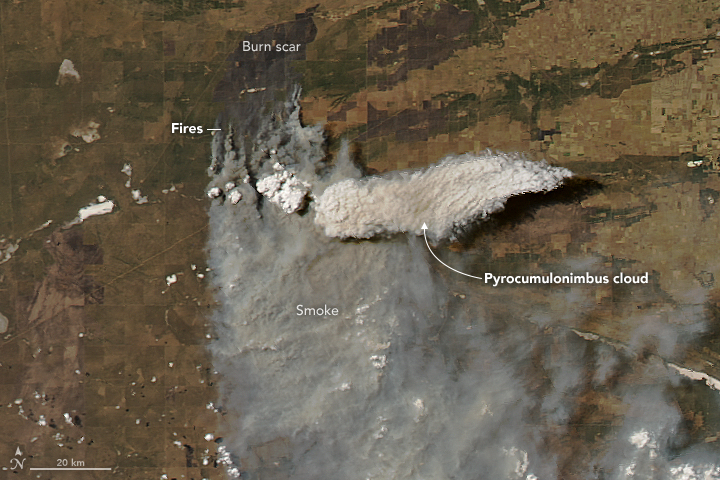 Roughly 12,000 wildfires burn each year in Argentina, charring more than 1.3 million hectares (5,000 square miles) of forest and grasslands. The Moderate Resolution Imaging Spectroradiometer (MODIS) on NASA’s Aqua satellite captured an image of one of them on January 29, 2018. The fire was burning in La Pampa Province, in an area where cattle graze among the espinal, a dry forest of thorny shrubs and small trees. The cause of the fire was not clear, but ranchers routinely light fires in this region to improve the quality of forage.

The image shows a prominent pyrocumulonimbus—a tall, cauliflower-shaped cloud that appears as an opaque white patch over darker smoke in satellite imagery. Pyrocumulonimbus clouds—also called cumulonimbus flammagenitus—are similar to cumulus clouds, but the heat that forces the air to rise (which leads to cooling and condensation of water vapor) comes from a fire instead of the sun-warmed ground. In order to classify a cloud as pyrocumulonimbus, cloud top temperatures observed by satellites must be -40°C (-40°F) or cooler.

Several factors affect the color of smoke in a satellite image, including the temperature of the fire, the composition of the fuel, and the amount of moisture in the smoke. In this case, an optical effect may be causing the pyrocumulonimbus to appear brighter than the older smoke below. “Fresher particles are smaller and scatter light differently than larger, fatter, and older smoke particles,” explained Santiago Gassó, an atmospheric scientist at NASA’s Goddard Space Flight Center. As a result, older smoke tends to look brown and more like dust.

In some cases, tall pyrocumulonimbus clouds can produce thunderstorms with dry lightning.

The heat from a wildfire can create its own weather.