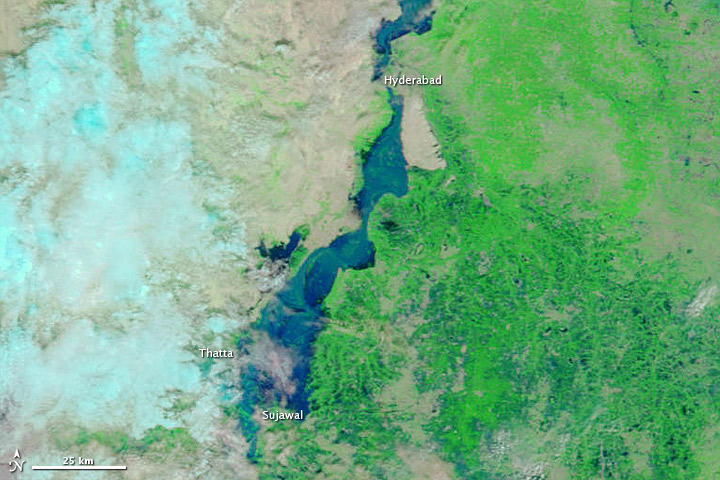 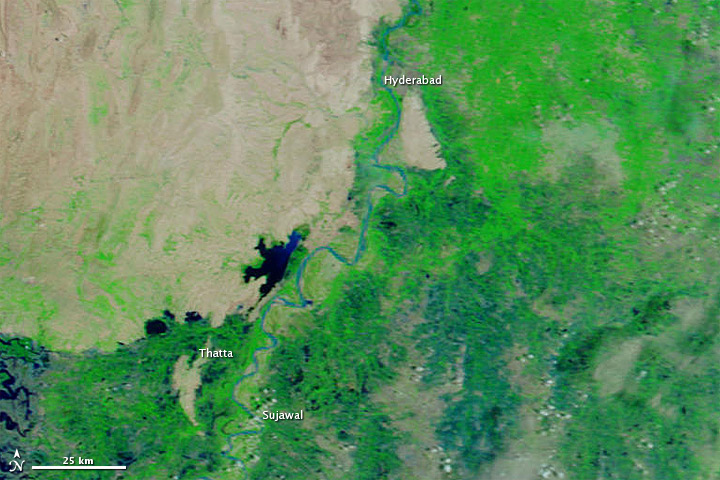 The floods that began in late July 2010 in Pakistan’s mountainous north had surged southward by late August, forcing tens of thousands to evacuate the city of Thatta near the coast, according to news reports. The city was virtually abandoned before residents and refugees surged back into town, fleeing floodwaters in nearby areas. While people fought furiously to save Thatta from the rapidly rising Indus River, the nearby city of Sujawal was submerged.

The Moderate Resolution Imaging Spectroradiometer (MODIS) on NASA’s Terra satellite captured these images of the Indus River Valley in southern Pakistan during the 2010 monsoon season. The top image is from August 29, 2010. The bottom image shows the same area roughly a month earlier, on July 31, 2010.

Both images use a combination of infrared and visible light to increase the contrast between water and land. Clouds appear in varying shades of light blue-green. Vegetation, even sparse vegetation, is green. Bare ground is pinkish brown. Water varies in color from electric blue to navy.

MODIS acquired the July 31 image during the early stages of the flooding, when northern Pakistan was hardest hit. Floodwaters had not yet surged southward down the Indus, which was a thin waterway meandering toward the coast. By August 29, the same river spanned more than 10 kilometers in some places. In the August 29 image, a cloudbank partially obscures the satellite sensor’s view of Thatta, but the image clearly shows floodwaters surrounding the city of Sujawal.

The United Nations Office for the Coordination of Humanitarian Affairs (OCHA) stated that, in southern Pakistan, the Indus River had swollen to 40 times its usual capacity in late August 2010, according to the BBC.