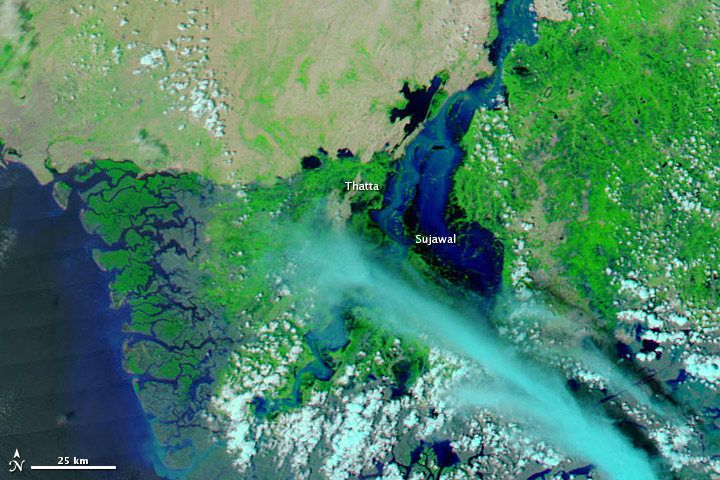 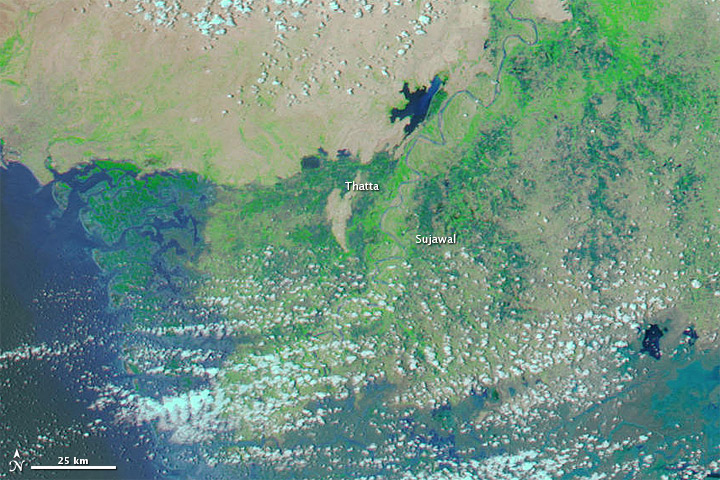 Heroic efforts to contain floodwaters saved the southern Pakistan city of Thatta in late August 2010, but nearby Sujawal was submerged in 5 to 8 feet (1.5 to 2.5 meters) of water, according to the Daily Times. Efforts to protect Thatta with quickly built levees were bolstered by a change in the floodwaters’ course; the high waters began moving away from heavily populated areas and out to sea.

The Moderate Resolution Imaging Spectroradiometer (MODIS) on NASA’s Aqua satellite captured these images of the Indus River Valley in southern Pakistan on September 2, 2010 (top), and July 16, 2010 (bottom). These images use a combination of infrared and visible light to increase the contrast between water and land. Clouds range in color from pale blue-green to bright turquoise. Vegetation is bright green. Bare ground is pinkish beige. Water varies in color from electric blue to navy.

Fairly persistent cloud cover along the Pakistani coast partially obscures the satellite sensor’s view of some areas around Thatta and Sujawal, but skies are clear enough to show a dramatic difference between mid-July and early September. The image from July 16 shows the area at the very beginning of the destructive monsoon floods. The Indus appears and a thin river meandering toward the coast. The image from September 2 shows the water body spanning kilometers—nearly 25 kilometers at one location. The floodwaters largely miss Thatta, but Sujawal is inundated.

As floodwaters headed south, some northern parts of the country began to slowly dry out, although survivors had to cope with homelessness, hunger, and waterborne disease. Standing water also lingered around some cities in central Pakistan.