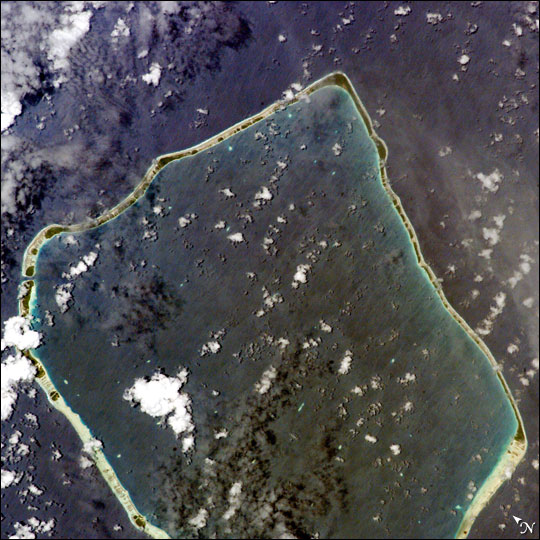 Apataki Atoll, an atoll in the Tuamotu Islands in the south Pacific, is approximately 370 kilometers northeast of the island of Tahiti, near 15°27' South, 146°19' West. In 1722, Dutch navigator Jakob Roggeveen became the first European to see the atoll. It was later visited by Captain Cook in 1774.

Atolls are ring-like coral islands that nearly or entirely enclose a lagoon. The atoll traces the perimeter of what was once the coastline of a volcanic island. According to the Coral Fact Sheet published by the National Oceanic and Atmospheric Administration, it can take an atoll as long as 30 million years to form. It may take 10,000 years for the reef to completely encircle the island and perhaps 100,000 years for a complete barrier reef to form. Over millions of years, the reef continues to build up, while the island itself erodes and sinks. Eventually, only the reef remains at the water’s surface; the rest of the island sinks beneath the waters of a central lagoon. At this point, the reef is considered an atoll. NOAA offers an animation illustrating the process.

In this image, some of the islands of Apataki Atoll have vegetation (dark green). The sparse soil of Apataki does not permit diverse vegetation. The coconut palm, which forms the basis for copra (dried coconut) production, is of special economic importance to the islanders. On a few islands, the residents cultivate vanilla. Agriculture is generally limited to simple subsistence. Fruit and vegetable staples include yams, taro, and breadfruit, as well as a wide range of tropical fruits. Pandanus leaves (the pandanus is a palm-like tree) are traditionally woven together as roof thatch (although corrugated sheet metal is also used today), as well as for other items such as mats and hats. The animal life on the islands is mostly seabirds, insects, and lizards. The underwater fauna, however, is diverse. Pearl-farming and tourism are both industries on Apataki. The beautiful and species-rich reefs make the Tuamotus one of the most scenic scuba-diving destinations in the world.

For more information about the formation of atolls, read: Amazing Atolls of the Maldives

Image ISS012.ESC2.039214802 is an image acquired from the EarthKAM payload onboard the International Space Station (ISS). The image was acquired on February 8, 2006, using a Kodak DCS 760 camera equipped with a 180 mm lens. Image annotation and information was provided by Westbrook Intermediate School students in the Clear Creek Independent School District, Texas. EarthKAM (Earth Knowledge Acquired by Middle school students) is an education payload that allows middle school students to plan for and target imagery taken by a remotely-controlled camera aboard the ISS. The most recent EarthKAM mission lasted from February 7-10, and allowed nearly 9,000 students from around the world to collect imagery.