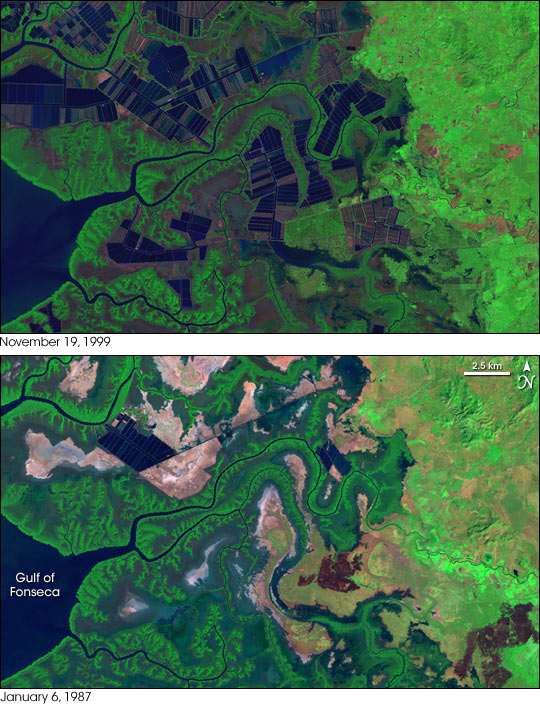 Shrimp aquaculture came to Honduras in the early 1970s, but the industry underwent vast expansion in the past two decades to become a major industry. Honduras is one of the top exporters of shrimp from Latin America. To create shrimp farms, coastal deltas are transformed from mangrove swamps into large holding ponds, which are then stocked with hatchery-raised or wild-caught shrimp brought in from the Gulf of Fonseca.

This pair of Landsat images shows the widespread conversion of natural mangrove swamps to shrimp farms along Pacific Coast of Honduras between 1987 and 1999. Deep blue colors show water features, including the Gulf of Fonseca (left) and flooded river deltas. Pale pink is non-vegetated land. Shades of green show vegetation, ranging from the deep greens of swampland to the brighter greens of forested hillsides. The shrimp farms appear as rows of rectangles. In the older image (bottom), mangrove swamps wander through the estuaries of several rivers as they reach the Pacific coast. At least one major shrimp farm can be seen in this scene in the upper left quadrant, verifying that shrimp farming was already underway at the time. By 1999 (top image), much of the region had been converted to blocks of shrimp ponds.

While shrimp aquaculture has provided economic options in developing Latin American countries, the industry creates some environmental and social problems. Mangrove destruction degrades water quality, reduces habitat for fish (pitting shrimp farmers against those whose livelihood depends on fishing), increases the risk of inland flooding, and displaces coastal communities. The ponds themselves can contaminate the surrounding environment with too many nutrients (from fish meal fed to the shrimp), waste, and antibiotic residues. Also, the industry relies heavily on wild-caught shrimp, either larvae that have reached a given level of maturity or else pregnant females, which are transferred to the protected ponds. When done on industrial scale, the harvesting of wild shrimp in the Gulf can harm other fisheries because the nets pull up fish or other aquatic creatures that die and are discarded. National and international programs are underway to make shrimp farming both economically viable and more environmentally sound.

These images were acquired by Landsat satellites 5 (1987) and 7 (1999). These false-color images were created by combining the shortwave-infrared, infrared, and green wavelengths of light detected by the sensors.

For decades, astronauts on space missions have documented land use changes around the world. Here, astronauts track the development of shrimp farming along the Honduran coastline of the Gulf of Fonseca between 1989 and 2001.