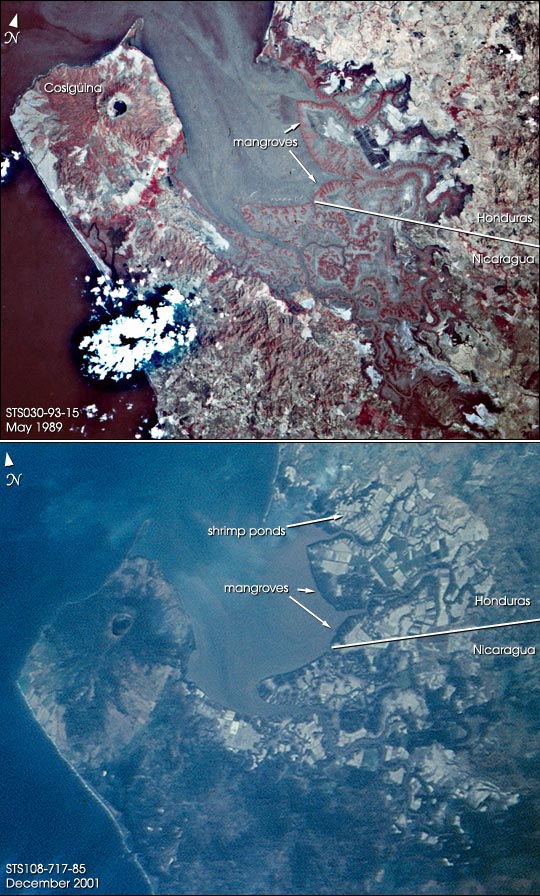 For decades, astronauts on space missions have documented land use changes around the world. In this pair of images, astronauts track the development of shrimp farming along the Honduran coastline of the Gulf of Fonseca between 1989 and 2001. Mariculture, primarily shrimp farming, has become a leading agricultural effort in Honduras. The regional transformation of large tracts of coastal swamps into shrimp farms blossomed throughout the 1990s. The top image was taken with color infrared film in 1989. Dense vegetation, like the coastal mangrove swamps and the forested slopes of Volcán Cosigüina show up as dark red. The bottom image, taken with color visible film by the crew of the most recent Space Shuttle mission in December 2001 shows that hundreds of square kilometers of coastal swamp, primarily in Honduras, have been converted to shrimp ponds. These appear as the light-colored, rectilinear land use pattern. The Honduras shrimp farms were hit hard by flooding after Hurricane Mitch in 1998, and a devastating virus in 1999-2000. It is not known how many of the ponds in this view are still functional. A vigorous debate continues about the sustainability of the shrimp farms and the impacts to the environment and coastal ecosystem due to mangrove clearing and mariculture waste production.

Apart from the shrimp farms, the other prominent feature on these images is the impressive volcano Cosigüina, which erupted explosively in 1859 (the largest recorded eruption in the Western Hemisphere).

Photograph STS-108-717-85 was taken in the December 2001 by the crew of Space Shuttle mission 108 using a Hasselblad camera with 250-mm lens. Photograph STS030-93-15 was taken in May 1989 using a Hasselblad camera and color infrared film. Both images are provided by the Earth Sciences and Image Analysis Laboratory at Johnson Space Center. Additional images taken by astronauts and cosmonauts can be viewed at the NASA-JSC Gateway to Astronaut Photography of Earth.

For decades, astronauts on space missions have documented land use changes around the world. Here, astronauts track the development of shrimp farming along the Honduran coastline of the Gulf of Fonseca between 1989 and 2001.

The Betsiboka Estuary on the northwest coast of Madagascar is the mouth of Madagascar’s largest river and one of the world’s fast-changing coastlines. Nearly a century of extensive logging of Madagascar’s rainforests and coastal mangroves has resulted in nearly complete clearing of the land and fantastic rates of erosion. After every heavy rain, the bright red soils are washed from the hillsides into the streams and rivers to the coast. Astronauts describe their view of Madagascar as “bleeding into the ocean.” One impact of the extensive 20th century erosion is the filling and clogging of coastal waterways with sediment—a process that is well illustrated in the Betsiboka estuary. In fact, ocean-going ships were once able to travel up the Betsiboka estuary, but must now berth at the coast.