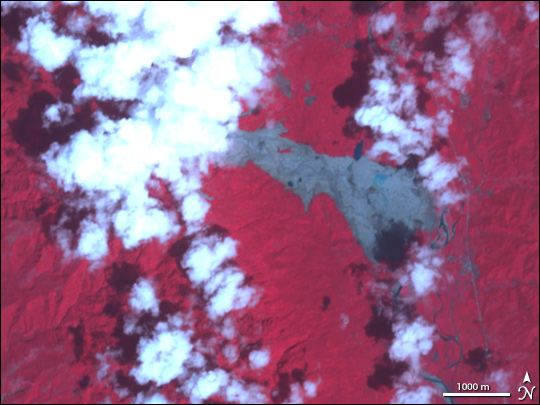 By March 1, 2006, the clouds over southern Leyte Island in the Philippines had largely cleared, providing the Advanced Spaceborne Thermal Emission and Reflection Radiometer (ASTER) on NASA’s Terra satellite with this view of the landslide that buried a town. Nearly 1,000 people died in the town of Guinsaugon when heavy rains triggered the landslide on February 17.

In this false-color image, the landslide is pallid gray against the vibrant red of the surrounding vegetation. Pools of pale aquamarine water on top of the mud reveal ongoing flooding. According to a Reuters news report, rescue efforts had to be suspended a few days before this image was taken because ongoing rain threatened further floods. This image also shows a dark blue lake above the landslide. This feature may have been present before the slide, or it may be a temporary lake created when the slide dammed a south-flowing waterway.

This slide and floods in nearby Mindanao Island occurred as rain pounded the southern Philippines islands throughout most of February. The unseasonable rains may have been connected to a developing La Niña. La Niña happens when the trade winds—winds that blow from east to west over the equator—are stronger than normal. The strong winds bring warmer water to the region around the Philippines and cooler water to the eastern Pacific off the shore of South America. These conditions often result in unusually wet weather in the Philippines.

Days of heavy rain triggered a devasting landslide in the southern Philippines on February 17, 2006.