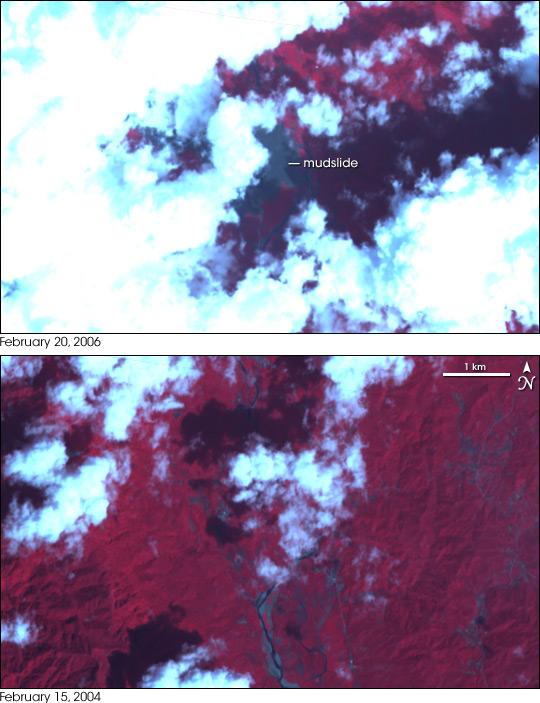 A massive landslide buried an entire village in the southern Philippines on February 17, 2006. On February 22, the United Nations Office for the Coordination of Humanitarian Affairs reported that 85 people were confirmed dead with an additional 981 missing and feared dead in the slide. This pair of images, taken by the Advanced Spaceborne Thermal Emission and Reflection Radiometer (ASTER) on NASA’s Terra satellite, shows the section of Leyte Island where the landslide occurred. In these images, plant-covered land is dark red, bare earth is grey, and water is dark blue. The landslide, partly obscured by clouds, is a dark grey slick in the top image, taken on February 20, 2006. The lower image, taken about two years earlier, shows the mountainous region before the slide scarred the land.

Though the exact cause of the landslide was still being determined as of February 22, heavy rains are probably to blame. Heavy rains drenched Leyte and Mindanao, the island immediately south of Leyte, through most of February, triggering widespread flooding. The unseasonable rains may have been connected to a developing La Niña.

Days of heavy rain triggered a devasting landslide in the southern Philippines on February 17, 2006.