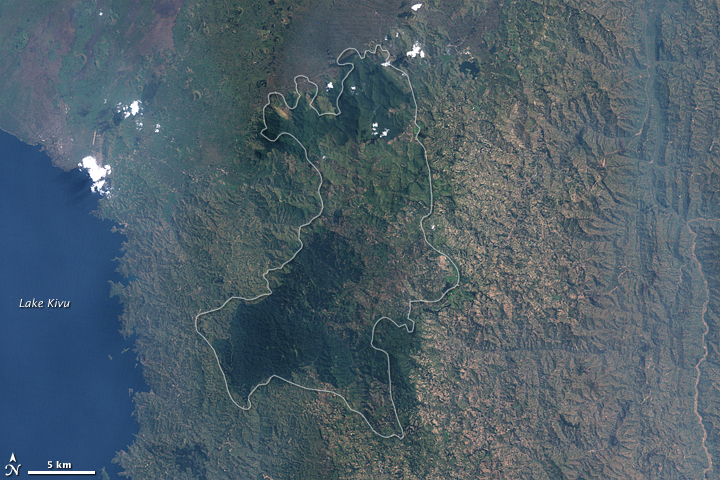 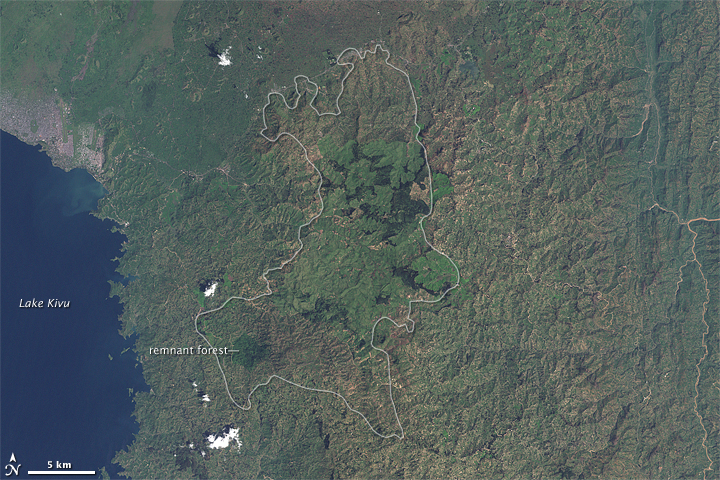 Rwanda is a small, mountainous country in east-central Africa, just a few degrees south of the equator. The country’s high elevation provides it with a tropical temperate climate, two dry and two rainy seasons each year, and relatively abundant surface water. With an estimated population in excess of 9 million, Rwanda is mainland Africa’s most densely populated country, according to the United Nations Environment Programme (UNEP). Although protected areas in Rwanda increased slightly between 1990 and 2005, the large population puts intense pressure on the land.

That pressure is evident in this pair of images showing deforestation in Gishwati Forest, a protected area in the northwestern part of the country, not far from Lake Kivu. NASA’s Landsat 5 satellite captured the top image on July 19, 1986. NASA’s Landsat 7 satellite captured the bottom image on December 11, 2001. Densely forested areas are deep green.

According to UNEP, the reserve’s forests were largely intact in 1978, and substantial forest cover still remained in 1986. But in the 15 years that elapsed between these images—a time that spanned the country’s tragic genocide—wave after wave of refugees arrived in Gishwati Forest and began clearing it, often for subsistence farming. By 2001, only a small circular patch of native forest remained—1,500 acres of the forest’s original 250,000.

Large tea estates occupy the central and northern parts of the reserve. The tea-growing areas are lighter green, and the dark green patches are probably plantations of eucalyptus or pine trees. (The wood boilers that produce the heat for drying tea consume huge amounts of firewood.)

Rwandan deforestation was driven by the need for food, medicine, charcoal, and timber, especially for commercial products. But the loss of so many trees in a rainy, mountainous country has had severe environmental consequences. In addition to tremendous loss of biodiversity, the region experiences soil erosion and degradation and landslides. UNEP hoped that innovative agroforestry techniques would help restore the vegetation, and reported that the forested land area in Rwanda had grown between 1990 and 2005. Reforestation efforts at Gishwati in the past few years have increased the remnant native forest to about 2,500 acres.

In 2008, the Rwandan government and the American conservation group Great Ape Trust of Iowa began a partnership to restore a corridor of native forest between Gishwati and the much larger Nyungwe Forest National Park, in southern Rwanda. They hope the corridor will preserve the genetic diversity of Rwanda’s remaining populations of chimpanzees.