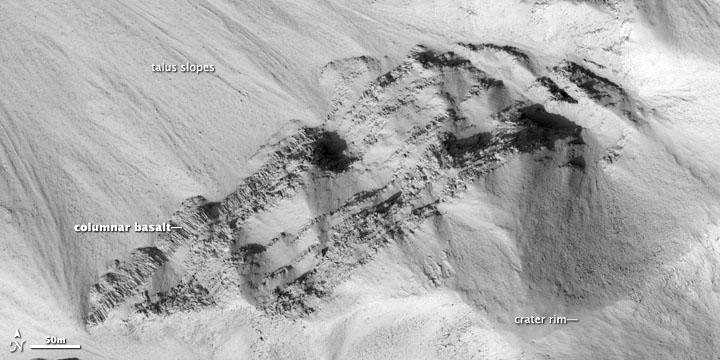 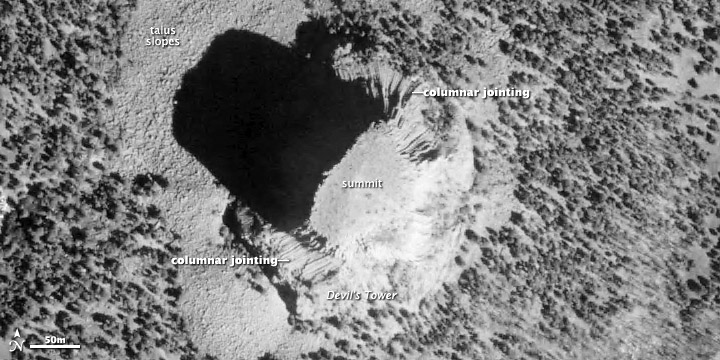 Although Mars is quite different from Earth in many ways—smaller, colder, drier, and hostile to life—in some respects the two worlds are quite similar. Volcanoes shaped the surface of both planets, and a distinctive feature of volcanism was recently found on the surface of Mars. Columnar jointing is a pattern of cracking in rocks that forms slender columns, typically six-sided. Jointing occurs when lava or magma comes into contact with a cool, flat surface. After the lava solidifies, it cools and shrinks, causing cracks to form perpendicular to the cool surface. In lava flows, cooling progresses from the top down (where the flow is in contact with air or water), forming regular columns.

These images show examples of columnar jointing on Mars (top) and Earth (below) at the exact same scale. The top image shows layers of solidified lava flows exposed on the rim of a 16-kilometer-diamter crater in the Marte Vallis region on Mars. This image from the High Resolution Imaging Science Experiment HiRISE instrument aboard NASA’s Mars Reconnaissance Orbiter shows the first columnar joints positively identified on a planet other than Earth.

Columns between 30–40 meters (100–130 feet) tall and about 2 meters (6.6 feet) wide comprise the lowest of the visible layers in the Mars image. (The exposed columns run from lower left to upper right in this image.) Beneath the columns, talus (eroded debris) slopes towards the crater floor. The crater rim is visible in the lower right corner. The Sun is lighting the scene from the lower left.

Jointed columns occur around the entire circumference of the crater, indicating that the lava flows cover a huge area: at least 200 square kilometers (77 square miles). The widespread lava flows stacked on top of one another appear similar to the terrestrial flood basalts of the Columbia River Basin in Idaho, Oregon, and Washington, where instances of columnar jointing are common. It is likely that runny lava from a distant source formed layers of basalt in Marte Vallis, and they were uncovered when an asteroid punched through the Martian surface.

Devil’s Tower (lower image) is one of the most famous examples of columnar jointing on Earth. Although the process—directional cooling and cracking—that formed the columns in Marte Vallis is similar at Devil’s Tower, the setting and source of molten rock are quite different. Devil’s Tower formed from a bubble of molten rock that rose up into layers of sedimentary rock in eastern Wyoming, but never broke through to the surface. Over millions of years, the surrounding and overlying rock eroded away, leaving the hard columns standing 386 meters (1,267 feet) above the Belle Fourche River. The summit of Devil’s Tower is flat and almost featureless. Large blocks of rock from collapsed columns bury the base of the tower in steep talus slopes. Trees cover the debris farther from the tower’s base. In this aerial photograph, sunlight comes from the lower right, which creates a long shadow pointing towards the upper left.

Although Mars is in many ways quite different from Earth—smaller, colder, drier, and hostile to life—the geology of the two worlds is sometimes quite similar. Columnar jointing—a distinctive pattern of hexagonal cracks—is visible in rocks on both planets.